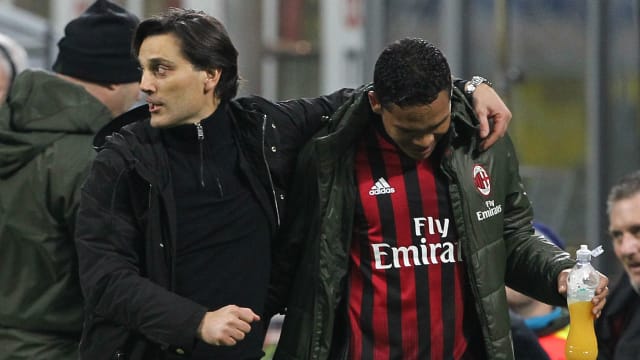 Vincenzo Montella says AC Milan would be foolish to focus their attentions solely on finishing above city rivals Inter as they aim to clinch a return to European football.

A Carlos Bacca-inspired 3-1 victory against Chievo on Saturday was enough for Milan to climb to sixth in Serie A, level on points with fifth-placed Lazio.

The result also took Montella's men above Inter, but the head coach is determined that his side aspire to more than simply topping their neighbours.

"I have not looked at the standings," he told Mediaset Premium. "It's nice to win before the others play. It will be a very sweet Sunday seeing how they do.

"[Being above Inter] is not important. Inter are not our only rival, we must aim to qualify for Europe. I would not like to get ahead of Inter and not get into Europe."

Meanwhile, two-goal Bacca is back among the goals with three in his last two after scoring just eight prior to his strike against Sassuolo on February 26.

Bacca was involved in a spat with Montella after being hauled off against Sampdoria last month, but the Colombia star thanked the coaching staff, his team-mates and Milan's fans for sticking by him.

"I was going through a difficult time and not scoring goals, but everyone always let me feel their support," he said. "It's important to feel the fans, my team-mates and the coach support me. I am happy, but have to work even harder.

"We need to take it one game at a time, we won a difficult match and from [Sunday] we'll start thinking about Juventus. I scored two goals and I am happy."