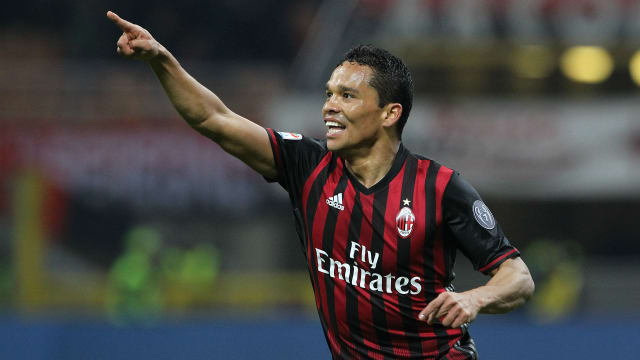 Carlos Bacca netted a brace as AC Milan piled pressure on the sides in the European places in Serie A with a 3-1 win at home to Chievo on Saturday.

A run of four league games without a win had seemingly put paid to hopes of a top-five finish for Vincenzo Montella's men, but they have now responded with a five-match unbeaten streak and deserved victory in this clash.

Knowing that a win would take them level on points with fifth-placed Lazio, Milan created chance after chance for Bacca - including a penalty that the 30-year-old missed late in the first half.

But the forward's goals - either side of Jonathan De Guzman's own converted spot-kick - proved decisive at San Siro, before Gianluca Lapadula scored from 12 yards to clinch victory.

It was not all good news for Montella, with Alessio Romagnoli's return offset by a fresh injury for Suso, but Milan at least remain in the hunt ahead of a tough trip to champions Juventus.

While Gianluigi Donnarumma made a smart early stop from Valter Birsa, Stefano Sorrentino, his opposite number, was rather less impressive as he gifted Milan the lead after 24 minutes.

Gerard Deulofeu slid Bacca in on the left, from where the forward cut inside and sent a tame finish bobbling past the easily wrong-footed goalkeeper.

Manuel Locatelli then placed a low curler just wide and Milan almost created a re-run of their goal as Deulofeu again teed up Bacca, whose strike was only partially blocked by Sorrentino before Ivan Radovanovic hacked clear.

But a controversial call from Fabio Maresca handed Chievo a route back into the game when he adjudged Mattia De Sciglio to have fouled Serge Gakpe at the back post, awarding a penalty that De Guzman confidently tucked away.

Another spot-kick quickly followed at the other end - with Bostjan Cesar handling Locatelli's goal-bound drive - but Bacca lashed over the crossbar from 12 yards.

Lucas Ocampos, on for Suso, nodded narrowly beyond the right-hand post shortly after half-time, and Bacca then somehow missed the target at the end of a wonderful winding run into the area past two defenders.

However, the Colombia international would not be denied a second goal - and it arrived with 20 minutes remaining. Romagnoli rose to meet a right-sided corner and nodded down into Bacca's path, allowing the frontman to scramble the ball across the line.

A hat-trick should have followed, too, but Bacca again blazed over as Milan seized possession from the kick-off to spring another move.

Donnarumma made a fine sprawling save from Birsa as Chievo chased an unlikely equaliser, and the hosts renewed their earlier attacking intent to win a second penalty when Mariano Izco fouled Ocampos.

This time, with Bacca already substituted, it was Lapadula who stepped up to drill the spot-kick into the net and make sure of the points.

Chievo could still have made the closing minutes interesting as Fabrizio Cacciatore was presented with a glaring opportunity, but he rifled against the crossbar and Milan escaped.