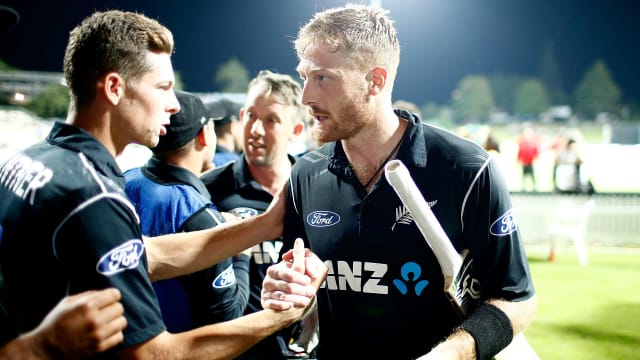 Martin Guptill reflected on his brutal match-winning unbeaten 180 as possibly the best of his career after New Zealand set up a one-day international series decider against South Africa with a seven-wicket victory in Hamilton.

The powerful opening batsman smashed 11 sixes in his devastating 138-ball knock on a testing track at Seddon Park, where the Black Caps chased down their victory target of 280 with five overs to spare on Wednesday.

Making his return after a month out with a hamstring injury, Guptill put on an astonishing show to ensure it is all to play for in the final match of the series at Eden Park on Saturday.

Guptill made 237 not out in a World Cup quarter-final against West Indies two years ago and an unbeaten 189 versus England in 2013, but said his latest masterclass might be the pick of the bunch.

3 - The three highest ODI scores ever recorded for @BLACKCAPS have been posted by Martin Guptill. Habit. pic.twitter.com/9dmZMxMiiq

"It's pretty up there, possibly number one. I'm reasonably happy with how today went without a lot of preparation," he said.

"It was difficult to bat all round, two-paced, turning, slower balls gripping, it wasn't easy, and I wanted to create a good partnership.

"I did that reasonably well and fortunately I was able to get a few out of the middle."

New Zealand captain Kane Williamson agreed with Guptill's verdict on were his incredible knock rated among his all-time best.

"I said to Martin when he came off, that's probably his best, and he's done it a few times to be fair so there are a few tight comparisons," said the skipper.

"In a chasing effort on what wasn't an easy surface and to hit the ball the way he did and play with the freedom we know he can and do something special against the best team in the world was a special, world-class effort."