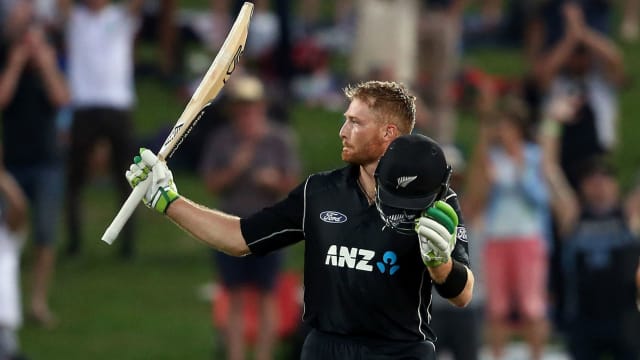 Martin Guptill marked his return to fitness in style with a stunning innings of 180 not out as New Zealand thrashed South Africa by seven wickets in Hamilton to keep their one-day international series alive.

Powerful opener Guptill, who is now responsible for the three highest ODI scores by a New Zealander, had missed the first three contests against the Proteas due to hamstring problems, but showed no sign of rustiness on Wednesday.

His spectacular 138-ball knock, featuring 15 fours and 11 sixes, enabled the Black Caps to easily hunt down a target of 280 with 30 balls to spare, meaning the five-match series will now be decided in Auckland on Saturday.

Guptill successfully reviewed an lbw decision that had gone in favour of Dwaine Pretorius on 62, yet there was little else to worry the 30-year-old as he dominated both the South African attack and a third-wicket partnership of 180 with Ross Taylor (66).

There were a few strokes of luck for Guptill towards the end of the chase and the winning runs came courtesy of a leading edge that almost led to him being caught by a diving AB de Villiers.

Yet any good fortune had been well earned during another masterclass by a player who also boasts unbeaten scores of 237 and 189 in 50-over internationals. His latest epic represents the fourth-highest second-innings score in ODI history.

"Possibly the greatest knock I have ever seen." - Kane Williamson on Martin Guptill's 180* #NZvSA ^WN pic.twitter.com/4HrPXY34Ul

De Villiers had earlier accelerated to 72 from 59 balls - an outrageous reverse scoop for four the highlight - to help South Africa recover from 143-5 to post 279-8 after being invited to bat.

Wayne Parnell also shone late in the innings, racing to 29 off 12 balls as 72 runs came from the final five overs, and there was a battling 67 from Faf du Plessis earlier in the piece.

It had appeared South Africa's total would prove competitive on a pitch offering assistance to the spinners, which prompted New Zealand to open the bowling with Jeetan Patel and Mitchell Santner.

However, Guptill had other ideas as he overcame the early loss of opening partner Dean Brownlie (4) to seize control of proceedings.

After sharing 72 with skipper Kane Williamson (21), Guptill received greater support from Taylor. The latter was not at his fluent best, but it mattered little as his partner stole the show with a performance to remember.