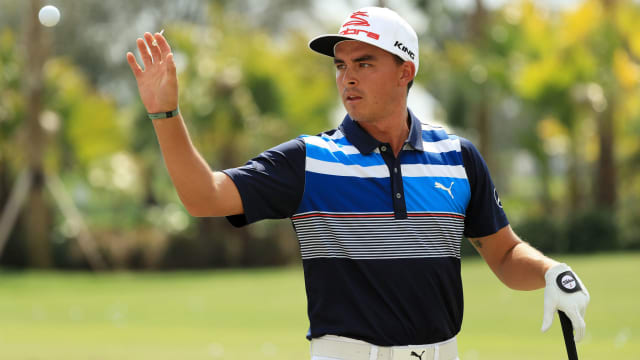 Rickie Fowler was in control of all facets of his game as he soared to the top of the Honda Classic leaderboard heading into the final round.

American Fowler carded a five-under-par 65 to surge four strokes clear after Saturday's penultimate round in Florida.

Fowler - who has not won since last January on the European Tour - had been one shot adrift when he teed off on the weekend but the three-time PGA Tour winner enjoyed a bogey-free round to be 13 under through 54 holes at PGA National.

England's Tyrrell Hatton is Fowler's closest competitor. The 25-year-old rising star is currently 18th in the world rankings and nine under for the tournament.

Rickie Fowler two-putts for birdie and a 5-under 65. #QuickHitspic.twitter.com/8o91YbOMDA

Hatton had six birdies and two bogeys for a four-under-par 66 at Palm Beach Gardens.

Emiliano Grillo and Sean O'Hair lead a group tied for third at seven under after both shot 65s on Saturday.

Gary Woodland finishes Round 3 at 7 under. pic.twitter.com/DkaUIhyXaV

Major champions Jimmy Walker (65) and Zach Johnson (67) headline a group of 12 players a stroke further back.

Spaniard Sergio Garcia shot up the leaderboard early with a four-under 66 to get back to five under.

Defending champion Adam Scott played his way out of contention after posting a 71 to fall back to two under. He beat Garcia by one shot last year.