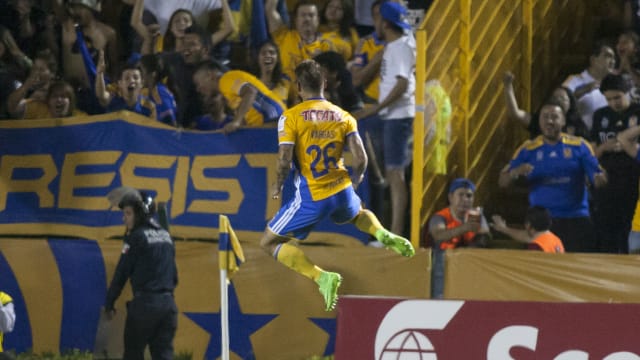 Eduardo Vargas scored for Tigres UANL as they were held by Pumas UNAM in the first leg of their CONCACAF Champions League quarter-final.

Vargas, who joined the club in January, netted for the Liga MX outfit for the first time in the 1-1 draw on Wednesday.

The Chile international's 25-yard effort for the hosts was cancelled out by Matias Britos just after the hour-mark.

The New York Red Bulls were held to a 1-1 draw at home to the Vancouver Whitecaps.

Kekuta Manneh had given Vancouver a 39th-minute lead with a header, but that advantage should have disappeared shortly after the break.

The hosts were awarded a penalty but Sacha Kljestan's Panenka attempt was kept out by David Ousted.

Bradley Wright-Phillips levelled for the Red Bulls in the 62nd minute and Vancouver were dealt a further blow when Cristian Techera saw red for a rash challenge.

The second legs of the ties will be played next month.