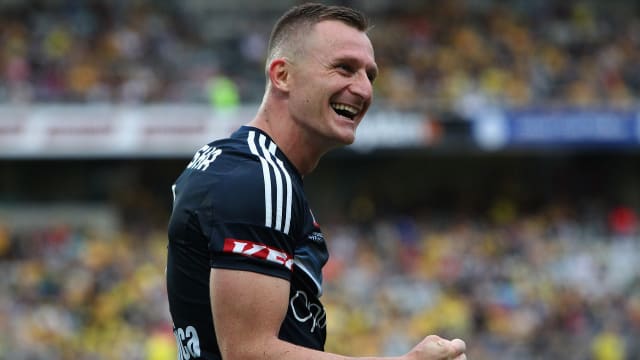 Melbourne Victory striker Besart Berisha expects to make his debut for Kosovo - the country of his birth - in next month's World Cup qualifier against Iceland.

Berisha has previously played international football for Albania, representing them 17 times, but had a special clearance approved by FIFA in January to switch to Kosovo, which only became a FIFA member in 2016.

The 31-year-old forward told reporters on Thursday that he wants to play for Albert Bunjaki's team when they host Iceland in only the fifth World Cup qualifier in Kosovo's history on March 24.

"At this stage it looks like I'm going to go - my first game to play for Kosovo," Berisha said.

"So for me it's a very exciting time because I decided to go and I hope I have a great time."

Victory's marquee forward was born in Kosovo's capital Pristina in 1985 when it was still a part of Yugoslavia but grew up in Germany, and made his debut for Albania - like many other Kosovars before and since - in 2006.

Berisha is on track to have his best season in the A-League in 2016-17, with his brace in last week's 3-0 win over Central Coast Mariners taking him to 16 goals for the campaign.

He has seven matches plus finals to score five goals and match his haul from his maiden A-League season in 2011-12 with Brisbane Roar.

Plus, Berisha needs just three more goals to become the first player to score 100 in the A-League, which he would like to achieve as soon as possible.

"Yes, kind of, because I expect these questions otherwise every press conference," he said.

"So I do like to make sure I reach [the milestone] as fast as possible because then it's done, but I'm focused really on the game coming up against Adelaide, which is really important."

Victory will host Adelaide United at AAMI Park on Saturday in a vital match for their premiership hopes.

Sydney FC's derby loss last week has opened the door for Victory to catch the leaders, with Berisha and Co. set to visit the Sky Blues on March 3.

After a disappointing scoreless draw away to Newcastle Jets, Victory produced some of their best football again against the Mariners last week, according to their leading marksman.

"I think what was really crucial was that we stuck to our structure and everybody did their role that they have to do... and this was all missing against Newcastle," Berisha said.

"We were very honest with each other, it was just not good enough and we played a great, great game against Central Coast."