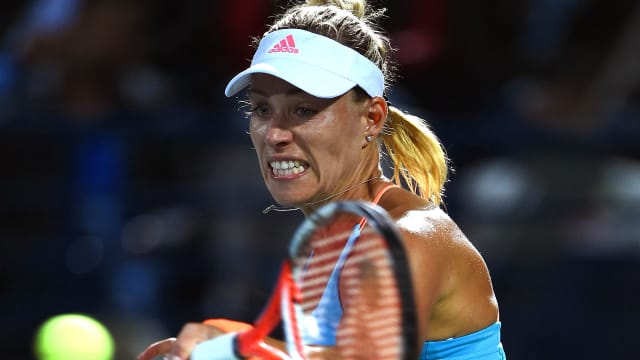 Angelique Kerber avoided another early exit with a second-round victory over compatriot Mona Barthel but Garbine Muguruza is out of the Dubai Tennis Championships after withdrawing due to injury on Tuesday.

Kerber was beaten by Daria Kasatkina at the Qatar Open last week in her first match since she was surprised by Coco Vandeweghe in the last 16 of the Australian Open, but was too strong for Barthel.

The world number two will face Monica Puig in a rematch of the Olympic Games final after seeing off Barthel 6-4 6-3, leaving her four wins away from returning to the top of the rankings.

Top seed Kerber was dominant from the baseline and broke five times, setting up the opportunity to gain revenge over Puig for a defeat in Rio which denied her a gold medal.

There will be no first tournament victory of the year for Muguruza this week after she retired when trailing 4-1 in the first set against Kateryna Bondarenko after struggling with a painful Achilles.

The French Open champion will undergo a scan on an injury she was troubled by in Doha last week, but is hopeful that the damage is not serious.

Second seed Karolina Pliskova was brought back down to earth after winning the Qatar Open last weekend, losing 6-2 6-4 to Kristina Mladenovic, while third seed Dominika Cibulkova was dumped out by Ekaterina Makarova.

Caroline Wozniacki, runner-up to Pliskova in Doha, eased past Viktorija Golubic, while Agnieszka Radwanska, Elina Svitolina and Elena Vesnina also made it through, but Barbora Strycova was another seed to bow out.

Julia Goerges was the only seed in action in the first round of the Hungarian Ladies Open, getting past qualifier Anett Kontaveit 6-7 (3-7) 6-3 6-4.

Anna Blinkova, Tamara Korpatsch, Aliaksandra Sasnovich and wildcard Fanny Stollar also made it through in Budapest.