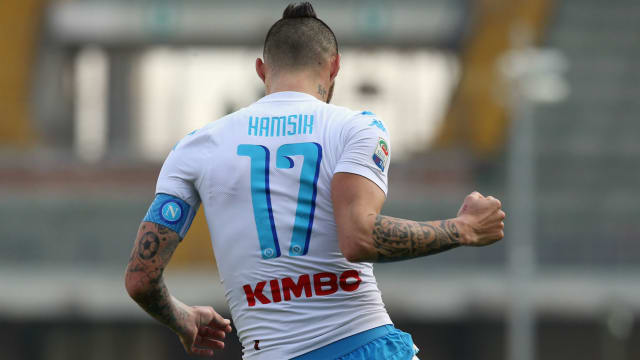 Napoli brushed Chievo aside 3-1 to secure a sixth Serie A win in seven matches and bounce back from their Champions League setback at Real Madrid.

Maurizio Sarri's men were outclassed by the same scoreline in Madrid on Wednesday, though it was they who cruised in Verona, making light work of their hosts to move back to within nine points of Juventus at the summit.

Chievo kept Napoli at bay for 31 minutes before Lorenzo Insigne curled a sumptuous 20-yard effort beyond the helpless Stefano Sorrentino.

And captain Hamsik added a second shortly after - stabbing home from close range after Allan seized on a defensive mix-up and squared to his midfield colleague.

10 - Marek Hamsik has reached double figure of goals in Serie A for the fourth time in his career. Crest. #ChievoNapoli

The talented Piotr Zielinski effectively ended Chievo's slim chances just before the hour mark with a deflected 25-yard finish at the end of a flowing move.

The hosts did manage to get a consolation goal, though, as Riccardo Meggiorini beat Pepe Reina with a clever finish after Kalidou Koulibaly failed to clear a routine lofted pass.