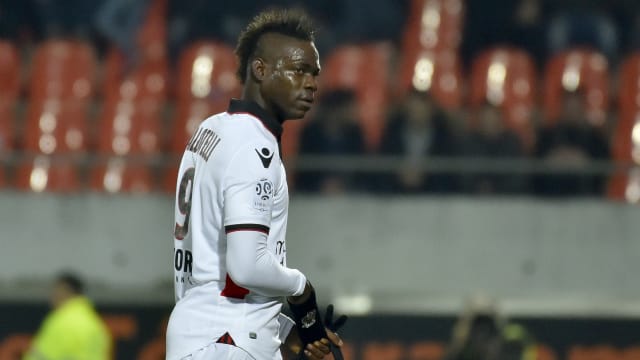 Mario Balotelli was sent off as Nice battled to a 1-0 away victory over Lorient to move above Ligue 1 champions Paris Saint-Germain and within three points of leaders Monaco.

That was Cyprien's seventh league goal of the season and it proved decisive despite Balotelli, who has been criticised by his own team-mates in recent weeks, seeing red after 68 minutes.

Balotelli was shown a red card for dissent at referee Tony Chapron, his third sending-off for Nice this season.

The incident was unusual, with the striker shouting at Chapron from a distance having competed for possession with defender Zargo Toure.

It was Nice's first win in six Ligue 1 away games and a timely one that sees them put the pressure on Monaco and PSG.

PSG, riding high after beating Barcelona 4-0 in the Champions League, are at home to Toulouse on Sunday and have the chance to move back above Lucien Favre's men.

Lorient remain bottom of the table after suffering a second consecutive top-flight defeat.