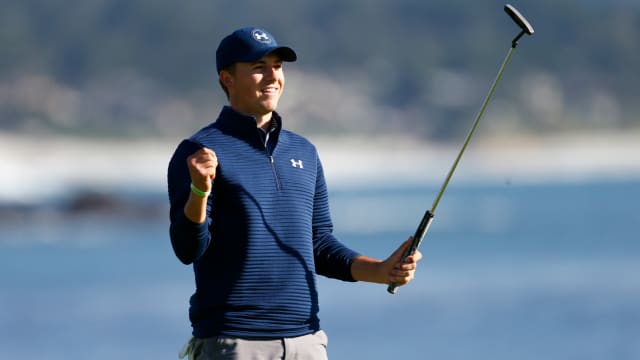 Spieth carded a two-under-par 70 in the final round on Sunday as he emerged triumphant at 19 under overall.

The two-time major champion finished ahead of Kelly Kraft as he won on the PGA Tour for the first time since the Dean & DeLuca invitational in May 2016, taking his career tally to nine victories.

Spieth, who played the final 28 holes without a bogey, is also the only player in Tour history to win by three or more shots five times before the age of 24.

The 23-year-old American started the day with a six-shot lead, and he turned in a bogey-free round to stave off the field.

Spieth had one birdie on either side surrounded by 16 pars to win at Pebble Beach for the first time in his career, sealing victory with a long-range birdie on the par-three 17th.

Jordan Spieth is a winner again!

He's claimed the @ATTProAm by 4 shots.

Former United States amateur champion Kraft (67) made a small run at Spieth early in the final round, cutting his lead down to three.

But Kraft was unable to build on his start. In the end, he still enjoyed his best week on Tour by finishing runner-up at 15 under.

After a slow start, two-time tournament champion Dustin Johnson rallied with three birdies on his last six holes to finish third at 14 under following a final-round 68.

Brandt Snedeker (70) cooled off after a hot start to finish a stroke further back.

World number one Jason Day ended the tournament in a three-way tie for fifth at 12 under, alongside Gary Woodland (65) and Jon Rahm (68).

Day, who co-led after the second round, bounced back from an abysmal performance on Pebble Beach during round three with five birdies and an eagle for a five-under-par 67.