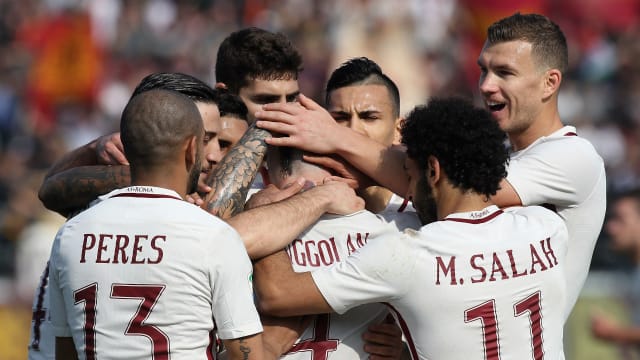 Roma cranked up the pressure on Serie A leaders Juventus with a deserved 2-0 win at lowly Crotone.

The capital club reclaimed second place in the table above Napoli thanks to goals in either half from Radja Nainggolan and Edin Dzeko, with the gap to Juventus - who visit Cagliari later on Sunday - cut to four points.

Dzeko had wasted the chance to put Roma in front in the 16th minute when he dragged a penalty wide of the left-hand post after Mohamed Salah had been pulled to ground by Gianmarco Ferrari.

However, Roma led at the break as Nainggolan - wearing the captain's armband - drilled a fine right-foot effort across the face of goal and into the bottom-left corner.

Dzeko's frustrating outing continued when a deflected shot hit the joint of the post and crossbar, with Federico Fazio also hitting the woodwork from the follow-up corner.

The former Manchester City striker was not to be denied, though, and he tapped in from Salah's cut-back in the 77th minute to complete the win.