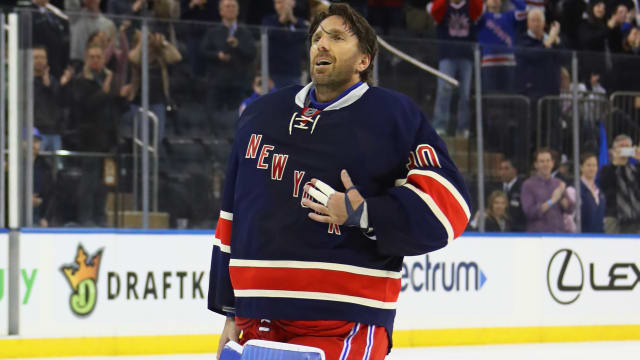 Henrik Lundqvist brought up a milestone win in the NHL, while fellow goaltender Braden Holtby continued his run.

Lundqvist became the 12th goalie in NHL history to win 400 games as the Rangers beat the Colorado Avalanche 4-2 on Saturday.

Holtby, meanwhile, has 14 straight wins after his Washington Capitals edged past the Anaheim Ducks 6-4.

Also extending a winning streak were the St Louis Blues, who recorded their fourth straight victory.

Lundqvist made 32 saves in his and the Rangers' victory.

WIN 400 FOR HENRIK!!!#NYR@HLundqvist30 is now the 12th goaltender in @NHL history who has earned at least 400 career wins! pic.twitter.com/DB5fr0iPcm

Kevin Klein scored twice in the win, to go with goals from Rick Nash and Kevin Hayes at Madison Square Garden.

Holtby now has the equal second-longest win streak by a goalie in NHL history.

He made 18 saves in the Capitals' hard-fought win, with Zach Sanford and Marcus Johansson scoring late in the third period.

The Blues brought up their latest win thanks to Patrik Berglund, who netted a hat-trick to see them past the Montreal Canadiens 4-2.

The Florida Panthers claimed a 7-4 win over the Nashville Predators and the Chicago Blackhawks cruised past the Edmonton Oilers 5-1.

The Boston Bruins edged the Vancouver Canucks 4-3, the Ottawa Senators shut out the New York Islanders 3-0 and the Philadelphia Flyers needed overtime to get past the San Jose Sharks 2-1.

The Dallas Stars made a hot start on their way to a 5-2 win over the Carolina Hurricanes, the Columbus Blue Jackets beat the Detroit Red Wings 2-1 and the Buffalo Sabres scored three times in the first period to overcome the Toronto Maple Leafs 3-1.

The Tampa Bay Lightning had a 4-1 win against the Winnipeg Jets and the Arizona Coyotes recorded a 4-3 overtime victory over the Pittsburgh Penguins.