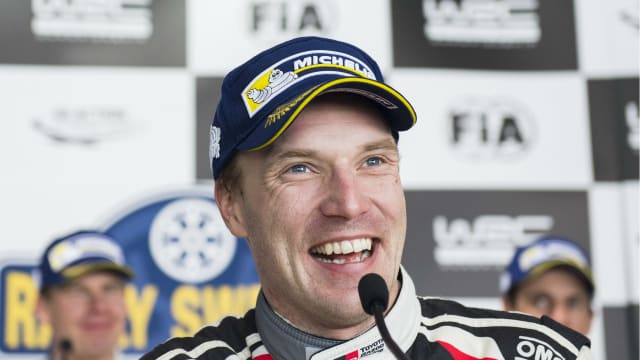 Jari-Matti Latvala became the first man other than Sebastien Ogier to lead the WRC drivers' standings since February 2014 after his win at the Rally Sweden.

Latvala took advantage of Thierry Neuville's spin on Sunday to claim victory by 29.2 seconds in Torsby, a result that lifts him above Ogier by four points in the overall standings.

It is a huge turnaround for the Finn, who was facing a season without a drive after Volkswagen's withdrawal, only for Toyota to offer him a late deal.

And his victory provided added joy for the Japanese manufacturer as they marked their second rally back after 17 years away with a win, their first success since 1999.

Icing on the cake, we take the 5 points in the Power Stage and we are now leading the #WRC#MegaHappy@MiikkaAnttila@TGR_WRCpic.twitter.com/18CNVNDByx

"It's amazing. A new team, a new car, our second rally and we're winning," said Latvala.

"I have no words to describe it, I'm so emotional.

"We're at a good level but now we go forward and it gets more difficult. Mexico is next up and I'm really motivated for the championship."