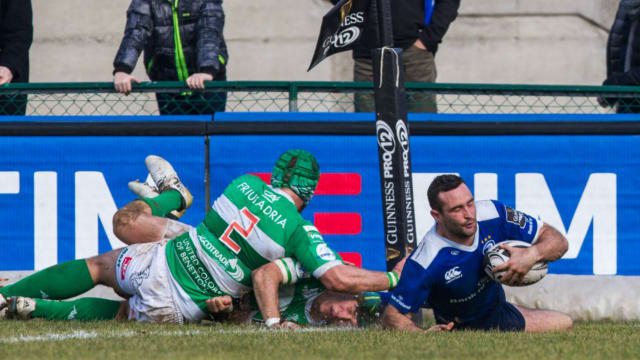 Dave Kearney marked his Leinster return with a first-half double as they eased to within four points of Pro12 leaders Munster with a 40-14 bonus-point victory over Benetton Treviso.

Kearney has not featured for Leinster since October due to an ankle injury but he was back with a bang on Sunday as Treviso were swept aside.

Leinster ran in three tries in the opening 40 minutes, Kearney's brace coming after Rory O'Loughlin's opener in the early exchanges.

Kearney's tries came after neat hands from the backs, the winger able to find gaps and penetrate the vulnerable Treviso line.

Adam Byrne, Joey Carberry and Bryan Byrne all went over in the second-half, while Leinster's points were boosted by the accurate kicking of Ross Byrne.

Sunday's other clash saw a dramatic climax as Connacht edged past Cardiff Blues 19-13 thanks to a 77th-minute drop goal from Tiernan O'Halloran and a Craig Ronaldson penalty.

There had been little to choose between the two sides for much of the encounter, but a late burst from the visitors proved enough to secure victory.