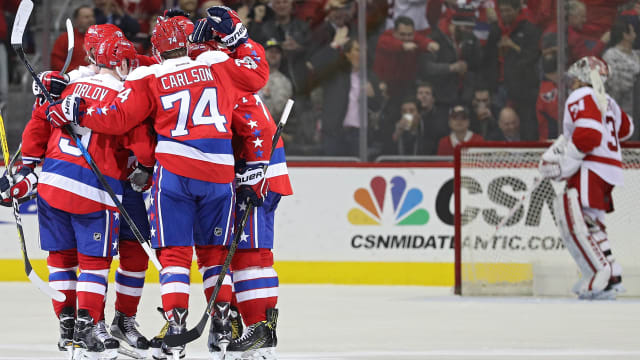 The Washington Capitals' home comforts continued in the NHL as the New York Rangers extended their winning streak.

A 6-3 win over the Detroit Red Wings saw the Capitals make it 11 straight victories at home on Thursday.

The Rangers are on a four-game winning streak after edging past the Nashville Predators 4-3.

Meanwhile, Bruce Cassidy's first game in charge of the Boston Bruins was a successful one.

T.J. Oshie scored a pair of goals and Nicklas Backstrom had two assists in the Capitals' latest home win.

But Washington, who trailed 2-1, had to rally, scoring the final three goals of the game.

He scored twice to go with goals from Michael Grabner and Chris Kreider, as New York overcame a two-goal deficit.

Cassidy's Bruins coaching debut ended with a 6-3 victory over the San Jose Sharks.

While David Pastrnak scored twice for Boston, Patrice Bergeron finished with four points after a goal and three assists.

The Pittsburgh Penguins claimed a 4-1 win over the Colorado Avalanche and the Anaheim Ducks powered past the Buffalo Sabres 5-2.

The Vancouver Canucks shut out the Columbus Blue Jackets 3-0, the New York Islanders beat the Philadelphia Flyers 3-1 and the Los Angeles Kings had a 6-3 victory over the Florida Panthers.

The Ottawa Senators edged the Dallas Stars 3-2, while the St Louis Blues (2-1 win over the Toronto Maple Leafs) and Montreal Canadiens (5-4 over the Arizona Coyotes) both needed overtime.