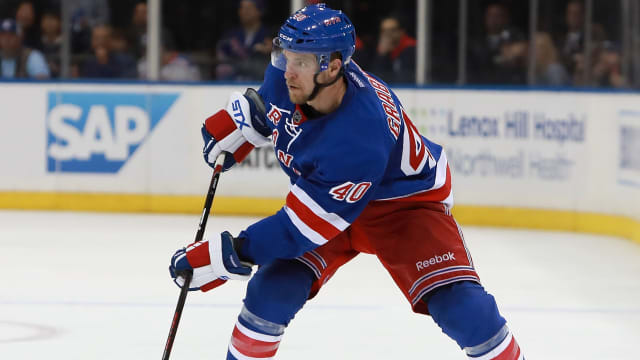 The New York Rangers gave coach Alain Vigneault a landmark win in the NHL, while Braden Holtby had a shutout.

A 4-1 win over the Anaheim Ducks saw Vigneault register his 600th NHL victory on Tuesday.

Holtby enjoyed another shutout, as the Washington Capitals blanked the Carolina Hurricanes 5-0 at Verizon Center.

Meanwhile, the Calgary Flames needed a shoot-out to get past the Pittsburgh Penguins.

A pair of goals from Michael Grabner saw the Rangers to their win.

Holtby completed his seventh shutout of the season in the Capitals' win.

The Flames gave up a two-goal lead before overcoming the Penguins 3-2 after a shoot-out.

Kris Versteeg scored the only goal in the shoot-out.

1:05 into OT: Game over. pic.twitter.com/r0dSAskYqk

The Buffalo Sabres edged past the San Jose Sharks 5-4 after overtime, while the Columbus Blue Jackets also needed OT to beat the Detroit Red Wings 3-2.

The St Louis Blues thrashed the Ottawa Senators 6-0, the Tampa Bay Lightning cruised past the Los Angeles Kings 5-0 and the Toronto Maple Leafs scored once in each period in a 3-1 win against the Dallas Stars.

The Nashville Predators had a 4-2 win over the Vancouver Canucks, the Minnesota Wild beat the Winnipeg Jets 4-2 and the Colorado Avalanche shut out the Montreal Canadiens 4-0.