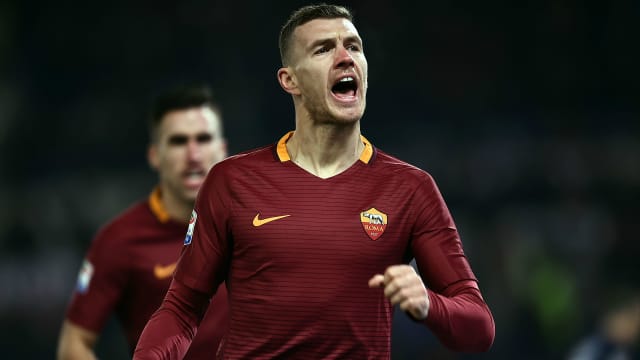 Edin Dzeko scored twice to help Roma to a 4-0 rout of Fiorentina that took them up to second in the Serie A table.

Luciano Spalletti's side were beaten 3-2 by Sampdoria last time out in the league, but bounced back on Tuesday with a deserved triumph that cut Juventus' advantage at the summit to four points.

Daniele De Rossi laid on the opening two goals, the first a defence-splitting pass that set up Dzeko to score for the fifth game running and the second a teasing free-kick that was headed in by Federico Fazio.

Radja Nainggolan added a third with 15 minutes remaining in the Italian capital before Dzeko netted his 17th league of the season.

And yet Fiorentina started well, Federico Chiesa springing the offside trap and lobbing Wojciech Szczesny, only for Fazio to race back and clear off the line.

Nainggolan played in Bruno Peres at the other end, but his shot was narrowly wide and the same combination carved out another chance on the half-hour mark, with the wing-back again wasteful from close range.

Roma extended their lead when De Rossi's whipped set-piece was headed home by Fazio via Tatarusanu's left-hand upright and Nainggolan got in on the action after he was played in by Kevin Strootman.

Dzeko completed the scoring eight minutes later, tucking the ball underneath Tatarusanu, and the Bosnia-Herzegovina international almost bagged his hat-trick in the closing stages but the keeper got down well and low to tip the shot away for a corner.