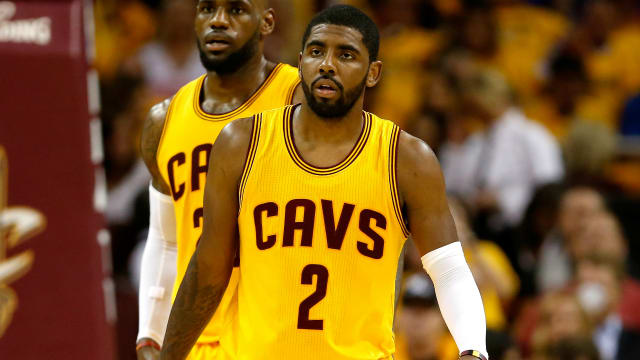 The Cleveland Cavaliers prevailed in a dramatic overtime tussle against the Washington Wizards, while the Indiana Pacers stayed hot.

After LeBron James fouled out, Irving scored 11 of his 23 points in OT in front of a sell-out crowd in Washington.

The Pacers extended their winning streak to seven games with a 93-90 victory at home to the Oklahoma City Thunder.

Meanwhile, the San Antonio Spurs were stunned 89-74 by the Memphis Grizzlies and the Toronto Raptors defeated the Los Angeles Clippers 118-109.

The Wizards had won 17 consecutive games on home court, but that was until Monday.

A back-and-forth game in the second half, Washington pulled ahead with just seconds remaining until James hit one of the craziest shots in NBA history to send the game to overtime.

Once again, the Wizards had the lead late until Irving knocked down a tiebreaking three-pointer with 35 seconds remaining for the Eastern Conference leaders.

James finished with 32 points and a career-high 17 assists, while Kevin Love had 39 points and 12 rebounds.

Bradley Beal scored 41 points and eight assists for the Wizards but he missed a game-tying three-pointer with nearly five seconds left in overtime.

Thanks to All-Star Paul George, the Pacers are in the midst of their longest winning streak in almost two years.

George posted 21 points as the Pacers overturned an 11-point half-time deficit at home to the Thunder.

San Antonio's three-game winning streak came to an end on a season-low night for the Spurs.

The Spurs, who were without All-Star Kawhi Leonard, faded in the final quarter as they were outscored 20-9 by the Grizzlies.

Memphis duo Marc Gasol and Zach Randolph had 15 points each.

KYRIE WITH THE SHOT. pic.twitter.com/5MzYi3HLSD

DeMar Derozan had 31 points in his return to the line-up to help the Raptors past the Clippers in Toronto.

Blake Griffin's triple-double of 26 points, 11 assists and 11 rebounds was not enough for the Clippers.

The Miami Heat edged the Minnesota Timberwolves 115-113 and the Utah Jazz accounted for the Atlanta Hawks 120-95.

The Phoenix Suns lost 111-106 to the New Orleans Pelicans, the Los Angeles Lakers beat the New York Knicks 121-107, the Detroit Pistons topped the Philadelphia 76ers 113-96, the Denver Nuggets were 110-87 winners over the Dallas Mavericks, while the Chicago Bulls overcame the Sacramento Kings 112-107.

The Houston Rockets and Orlando Magic is the pick of the three matchups on Tuesday. Elsewhere, the Brooklyn Nets face the Charlotte Hornets and the Mavericks entertain the Portland Trail Blazers.