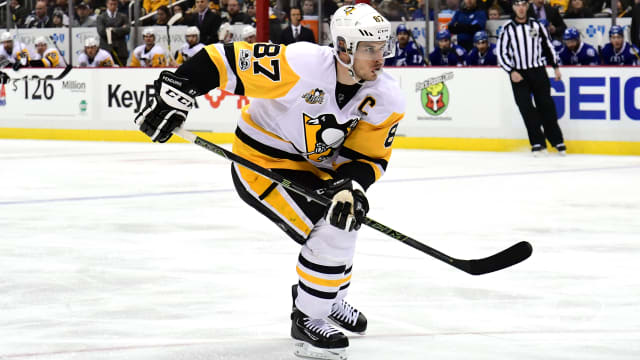 Sidney Crosby starred in a Pittsburgh Penguins win in the NHL, while Mikael Granlund netted a hat-trick for the Minnesota Wild.

A pair of goals and an assist from Crosby helped the Penguins past the St Louis Blues 4-1 on Saturday.

Granlund also impressed, his hat-trick leading the Wild to a 6-3 victory over the Vancouver Canucks.

Meanwhile, the Toronto Maple Leafs ended their losing streak in a thriller.

Crosby opened and completed the scoring in the Penguins' win.

In between, he set up Justin Schultz to make it 3-0 after Kris Letang had added to his opener.

Along with his three goals, Granlund also had an assist for the Wild.

The Maple Leafs snapped a three-game losing streak with a 6-5 win against the Boston Bruins.

James van Riemsdyk was the hero for Toronto, scoring the winner with just over 90 seconds remaining.

Goals like that will rally the boys every time. pic.twitter.com/DYTmSe0DAr

The Washington Capitals overcame the Montreal Canadiens 3-2 and the Los Angeles Kings needed overtime to get past the Philadelphia Flyers 1-0.

The Colorado Avalanche crushed the Winnipeg Jets 5-2, the Buffalo Sabres shut out the Ottawa Senators 4-0, the New Jersey Devils eased past the Columbus Blue Jackets 5-1 and the New York Islanders went down to the Carolina Hurricanes 5-4 after OT.

The Tampa Bay Lightning had a 3-2 shoot-out win over the Anaheim Ducks, the Chicago Blackhawks beat the Dallas Stars 5-3, the Detroit Red Wings edged the Nashville Predators 1-0 and the Arizona Coyotes needed a shoot-out to beat the San Jose Sharks 3-2.