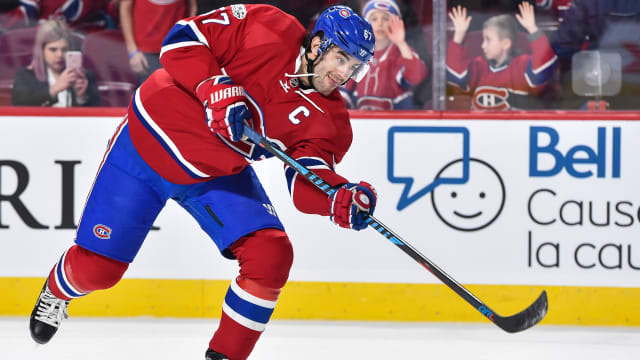 A Max Pacioretty hat-trick led the Montreal Canadiens in the NHL as the Columbus Blue Jackets held off the New York Rangers.

Pacioretty's treble helped the Canadiens to a 5-2 win over the Buffalo Sabres on Tuesday.

There were goals aplenty at Madison Square Garden, where the Blue Jackets overcame the Rangers 6-4.

Pacioretty lifted the Canadiens, scoring once in each period of their win at Centre Bell.

Carey Price made 37 saves for Montreal, who also got goals from David Desharnais and Paul Byron as they opened up a five-goal lead.

Columbus went one better, going 6-0 up on the Rangers.

A pair of goals from Seth Jones set up their lead, which suddenly came under threat in the third period.

The Rangers pulled back four goals, but left it too late to get any closer.

The Capitals had Evgeny Kuznetsov and Alex Ovechkin score as they went down to the New York Islanders 3-2.

The hats are flying in Montreal. #BUFvsMTLpic.twitter.com/ri9ZCSziCV

Aho. A hat trick. The 19-year-old has three. pic.twitter.com/g70nGckMW0

The Florida Panthers beat the Ottawa Senators 6-5 and the Dallas Stars made a hot start on their way to a 6-3 win against the Toronto Maple Leafs.

The Carolina Hurricanes enjoyed a 5-1 win over the Philadelphia Flyers, the Pittsburgh Penguins beat the Nashville Predators 4-2 and the New Jersey Devils overcame the Detroit Red Wings 4-3.

The Boston Bruins edged the Tampa Bay Lightning 4-3, the Winnipeg Jets were too good for the St Louis Blues 5-3, the Arizona Coyotes went down to the Los Angeles Kings 3-2, the Minnesota Wild defeated the Edmonton Oilers 5-2, the Anaheim Ducks claimed a 5-1 win over the Colorado Avalanche and the San Jose Sharks rallied past the Chicago Blackhawks 3-1.