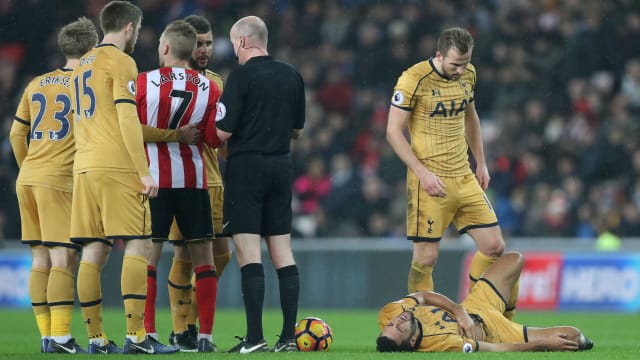 Harry Kane criticised Jack Rodwell for a "dangerous" tackle on Mousa Dembele in Tottenham's 0-0 draw at Sunderland and called on referees to offer more protection from such challenges.

Rodwell found himself in an awkward position in the first half of Tuesday's game, as Dembele glided past him and threatened to spring a Spurs counter.

The former Everton man swiftly hacked the Belgian down in cynical fashion, kicking him around the knees and sending Dembele tumbling to the ground.

Spurs players were visibly furious at referee Lee Mason for refusing to brandish a straight red card and Kane believes that not reacting harshly enough to such tackles is "dangerous".

"You could say the other team were physical," he told reporters. "I think there were some decisions on that pitch that were very surprising.

"I think Mousa getting kicked knee-high on the pitch [was an example of their physicality]. If you go up to anyone on the pitch and kick them knee-height on purpose, it doesn't matter if it's a 'tactical foul', let's say; it's a red card.

"There's another one. Sonny's [Heung-min Son] got a big gash going down his shin where the guy's kicked the ball and followed through onto his shin.

"Yes, it's physical, but then I think we have to be protected as well, so obviously we're disappointed from that side of it. It was a disappointing night.

"Referee Lee Mason obviously just saw Rodwell's challenge as a tactical foul, but I think we all know a pull on the shirt or a trip on the foot or the shin even is one thing. But kicking someone knee-height on purpose like that, I think it's a dangerous tackle and for me I think it's definitely a red card."