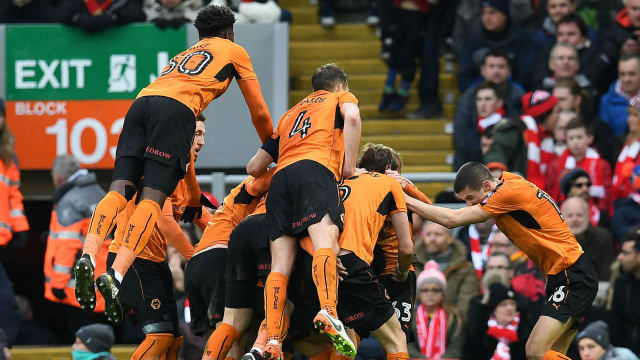 The 'magic' of the FA Cup has become somewhat of a cliche in recent years, but Saturday's fourth-round action provided more of the surprises that have become so synonymous with the world's oldest cup competition.

It has been a miserable eight days for Jurgen Klopp, who saw Liverpool beaten at Anfield by lowly Swansea City in the Premier League and by Southampton in an EFL Cup semi-final upset.

And it was three home defeats in a row as Championship side Wolves caused another shock in a 2-1 win. Richard Stearman headed home in the first minute, before Andreas Weimann rounded goalkeeper Loris Karius to double the lead before the break.

Divock Origi lashed in a late consolation and Wolves survived an onslaught as Klopp suffered three straight home defeats as a manager for the first time since 2007.

Wow what a day to be associated with this great club! An incredible feeling and an immense performance from the team #wolvesaywepic.twitter.com/ZiyI1SFYjC

Non-league Lincoln City upset the odds to beat Ipswich Town in a replay in round three, and faced an even tougher ask against Brighton and Hove Albion - who are riding high in the Championship.

The game was following the script when Richie Towell put Brighton in front in the 24th minute, but an Alan Power penalty and own goal from Fikayo Tomori turned the match on its head before Theo Robinson rounded off a superb comeback.

Here's the proof folks. Lincoln City are into the FIFTH ROUND and LAST 16 of the @EmiratesFACuppic.twitter.com/LDBy3JWxkb

Newcastle United, second behind Brighton in the Championship, continued a miserable record of not going beyond round four since 2006 after losing 3-0 at Oxford United.

A much-changed Magpies line-up fell behind to Kane Hemmings' goal, before Aleksandar Mitrovic missed a penalty to restore parity. Curtis Nelson met Rob Hall's corner to add to Newcastle's woes, and Toni Martinez completed the job for League One Oxford.

WYCOMBE FALL AT THE LAST

Twice it looked as though Spurs were going to be subject to a giant killing at White Hart Lane.

League Two's Wycombe Wanderers were 2-0 up at the break through experienced striker Paul Hayes' brace, the second of which came from the penalty spot.

Thank you & well done to @SpursOfficial. You have been awesome hosts & we were so proud to run you that close. Good luck in the next round.

Tottenham had seemingly swung the match in their favour as Son Heung-min's deflected goal and Vincent Janssen's spot-kick levelled the scores, only for Garry Thompson to head Wycombe back in front with six minutes to go.

But the drama was still not finished. Substitute Dele Alli again brought Spurs level before, with virtually the last kick of the game, Son's side-foot shot was diverted into the goal by Joe Jacobson as Wycombe suffered a heart-breaking 4-3 loss.

While there were shocks and near giant-killings, Chelsea, Manchester City and Arsenal had no such trouble.

City, on paper at least, had a taller order away at Crystal Palace, but Raheem Sterling, Leroy Sane and Yaya Toure ensured a comfortable 3-0 win.

Theo Walcott scored a hat-trick against his old club and Danny Welbeck marked his first start since recovering from major knee surgery with two goals as Arsenal battered Southampton 5-0.