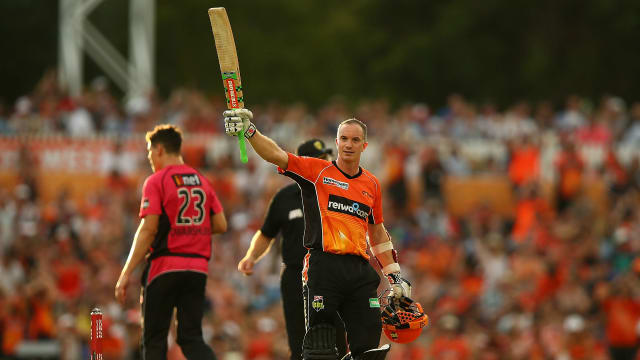 Michael Klinger made a rapid, unbeaten half-century as Perth Scorchers produced an outstanding all-round display to regain the Big Bash League title with a crushing nine-wicket victory over Sydney Sixers at the Furnace.

The Scorchers won successive championships in 2013-14 and 2014-15, before Sydney Thunder were crowned last year, but normal service was resumed in front of a raucous record crowd of 21,832 in Perth on Saturday.

Brad Haddin top scored with 38 from only 25 balls but impressive 20-year-old Richardson got rid of the former Australia wicketkeeper and captain Moises Henriques (21) in quick succession as the Sixers' innings never really got going.

The Scorchers had no such trouble in their run chase, with Klinger blasting 71 not out from only 49 deliveries and Ian Bell remaining unbeaten on 31 to get the Scorchers home with 25 balls to spare.

Sam Whiteman also made 41 at the top of the order in a one-sided showdown, with the Stars never looking like adding to the solitary title they won in the inaugural Big Bash League in 2011-12.

HUGE! Some catching practice for the fans at #TheFurnace as Klinger brings up the 100 for the Scorchers! #BBLFinalpic.twitter.com/wIohr4ldJp

JOHNSON ON THE MONEY

Johnson claimed astonishing figures of 3-3 in the semi-final victory over Melbourne Stars and the left-arm quick strangled the Stars with a brilliant exhibition of fast bowling.

The ex-Australia paceman conceded just one run off the first over of the game and got rid of the dangerous Michael Lumb in his second over - in which Nic Maddinson was run out - to reduce the Stars to 17-3.

Johnson conceded just the one boundary and deserved more than a solitary wicket after the 35-year-old set the tone for the Scorchers.

RICHARDSON RISES TO THE OCCASION

Richardson showed no sign of nerves on the big stage, striking twice in as many overs to remove Haddin and Henriques after they had combined for a fourth-wicket stand of 57.

Both batsmen picked out midwicket when Richardson dug deliveries in short of a length and he struck again to get rid of Jordan Silk to leave the Sixers in a mess on 80-6.

Richardson with the massive double-strike! Henriques the next to go... #BBLFinalpic.twitter.com/w8BcB4eCqn

Any hope the Stars had of denying the Scorchers their third title were soon extinguished when Klinger and Whiteman put on 75 for the first wicket in just 7.3 overs.

While Whiteman was stump after being deceived by Nathan Lyon (1-28), Klinger was untroubled as he smashed five sixes and as many fours to get the celebrations under way.

Bell played a supporting role in a partnership of 69, hitting Sean Abbott for classy back-to-back boundaries and lofting him for six over long-off before Klinger cleared the ropes to seal an emphatic win.