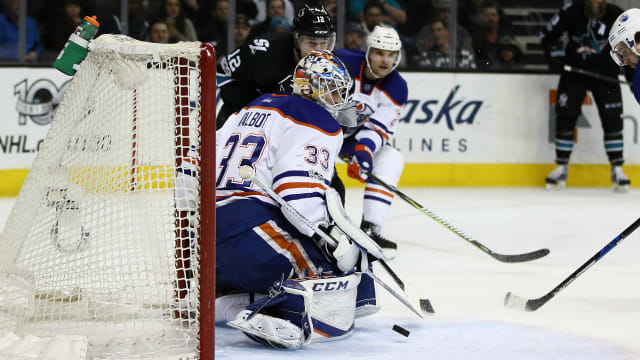 The Edmonton Oilers moved into a tie in the Pacific Division, while the Boston Bruins came back to beat the Pittsburgh Penguins in Thursday's NHL action.

Goaltender Cam Talbot starred as the Oilers accounted for the San Jose Sharks, claiming a 4-1 victory.

Evgeny Kuznetsov inspired the Washington Capitals to a 5-2 victory over the New Jersey Devils, while the Minnesota Wild trumped the St Louis Blues 5-1.

Thursday's win in San Jose saw the Oilers join the Sharks atop the pacific with 64 points apiece.

Talbot produced an excellent performance to keep the Sharks at bay, making 32 saves for the visiting Oilers.

Trailing by two goals in the second period, the Bruins displayed their resilience to outlast the Penguins.

Brad Marchand scored twice for the Bruins, before Patrice Bergeron netted the game-winning goal to complete the comeback in Boston.

The Penguins have lost back-to-back games since winning four in succession.

Two goals from Kuznetsov set the tone for the Capitals, while Alex Ovechkin posted his 23rd of the season.

The Capitals have allowed two or fewer goals in a game on 32 occasions this term.

BLINK AND YOU'LL MISS IT!

The Wild scored three goals in less than three minutes as they downed the Blues.

Minnesota's victory ensured they stayed top in the Central Division and Western Conference with 69 points.

The Florida Panthers prevailed 2-1 in overtime against the Tampa Bay Lightning and the Calgary Flames beat the Ottawa Senators 3-2.

Elsewhere, the Philadelphia Flyers edged the Toronto Maple Leafs 2-1, the Los Angeles Kings shut out the Carolina Hurricanes 3-0, the Arizona Coyotes blanked the Vancouver Canucks by the same scoreline, the Montreal Canadiens lost 3-1 to the New York Islanders and the Chicago Blackhawks suffered a 5-3 defeat to the Winnipeg Jets.

The Nashville Predators were 4-3 winners against the Columbus Blue Jackets, while the Dallas Stars topped the Buffalo Sabres by the same scoreline.

The regular season takes a break with the NHL's best on show in Los Angeles.