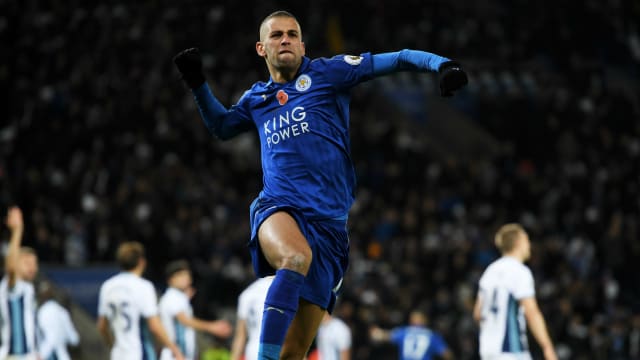 Claudio Ranieri has ruled out the prospect of selling Islam Slimani to Chinese side Tianjin Quanjian.

The Algeria striker is the latest Premier League player to be linked to the Chinese Super League, with reports suggesting that he is the subject of a £38.5million offer.

Ranieri, however, has dismissed the prospect of selling the 28-year-old, who only joined the English champions from Sporting CP last August.

"It's speculation," he told a news conference. "Slimani is not for sale."

Leicester are said to be interested in signing Gaston Ramirez from Middlesbrough, with Aitor Karanka confirming on Thursday that the player has submitted a transfer request.

However, when pressed on the prospect of a deal, Ranieri said: "I don't confirm anything. You know I don't speak about speculation. In six days you will know everything."

Another player to be linked with a move away from Leicester is Leonardo Ulloa, with the striker's agent reportedly having called Ranieri "a liar" over the breaking of promises relating to Ulloa's involvement.

The 30-year-old is out injured and will miss Friday's FA Cup clash with Derby County but Ranieri insists his relationship with the player has not soured.

"Leo is still injured," he said. "I want him as he's a good player, of course he would like to play more. If someone wants Leo, they have to pay.

"I spoke with him, he said what the agent said is his matter, not Leo's matter. I think he will stay here with us.

"The agent said I was a liar - but I don't want to respond to him. With Leo I always have a fantastic relationship. I understand him."