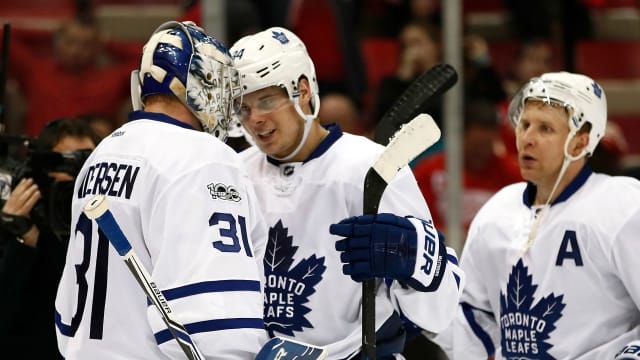 Leafs star Auston Matthews netted his 23rd goal of the season and Frederik Andersen made 22 saves in a 4-0 victory, pushing Detroit's losing slump to four games.

Meanwhile, the Flyers stunted the high-scoring New York Rangers' win streak at three with a 2-0 victory.

It is always high drama when Maple Leafs coach Mike Babcock returns to take on his old team, having gone 1-2-1 against the Red Wings in his first Toronto season a year ago.

But the young Leafs now have won both meetings this season and, with 55 points in 46 games, sit in third place in the Atlantic Division as Detroit toils in last on 49 points, jeopardising the franchise's 25-year streak of qualifying for the playoffs.

Matthews, Roman Polak, James van Riemsdyk and Nikita Soshnikov were the goalscorers Wednesday for Toronto, who are 5-1-1 in their last six games.

Andersen logged his second consecutive shutout and third of the season.

The Rangers hosted Philadelphia second in the NHL averaging 3.44 goals per game, but failed to crack Flyers goalie Steve Mason.

Mason stopped all 34 shots faced as the sporadic Flyers gained much-needed ground in the Metropolitan Division and chase for a wildcard playoff spot.

Jakub Voracek and Wayne Simmonds provided the goals, both in the third period, for Philadelphia. New York were shut out for the first time since November 27.

The Edmonton Oilers scored an emphatic 4-0 win over Pacific Division foes the Anaheim Ducks thanks to a pair of Leon Draisaitl goals and 26 saves by Cam Talbot.

Ryan Nugent-Hopkins and Zack Kassian also scored as the Oilers moved to within one point of the second-placed Ducks in the division.

Edmonton are 6-0-1 in their last seven games.

Vancouver Canucks forward Sven Baertschi's power-play goal midway through the third period stood as the decisive blow in a 3-2 win over the Colorado Avalanche.

Baertschi also scored a goal in the first period, bringing his season total to 13 - two shy of a career high set a year ago.

Hold up! @ctalbot33 is all about the stellar saves. #EDMvsANApic.twitter.com/IES1IQ1ZKu

When @AM34 finds the puck, it's going in the net. #TORvsDETpic.twitter.com/LD48WfJr2L