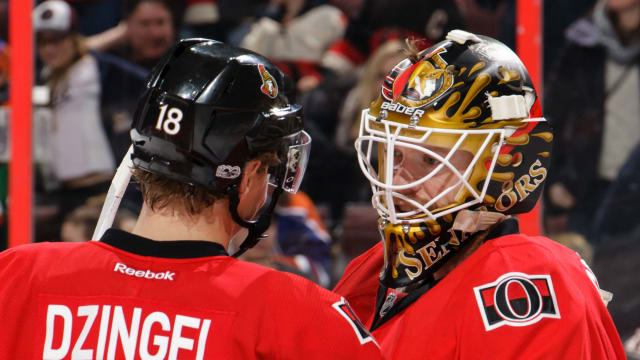 The St Louis Blues and Ottawa Senators shut out two of the NHL's highest-scoring teams in a pair of thorough victories on Tuesday.

The Washington Capitals visited Ottawa as winners of 12 of 13 but failed to score a goal for the first time since December 1 in a 3-0 loss to the Senators.

Equally hot, the Pittsburgh Penguins saw a four-game win streak snapped in a 3-0 win for the Blues.

Elsewhere, the Buffalo Sabres stormed back from a two-goal deficit to stun the Nashville Predators in overtime, one of three games decided by extra time.

NHL-leading Washington scored four of more goals in each of their last eight games before being held scoreless by the Senators.

The Senators are 6-1-1 in their last eight games and sit in second place in the Atlantic Division with 57 points in 46 games.

BLUES GET BEST OF PENS

St Louis were reeling before arriving in Pittsburgh, having allowed 18 goals against during a three-game losing streak.

Blues backup goalie Carter Hutton snapped the funk in a big way with a 34-save shutout, his second in four starts.

Colton Parayko, Ryan Reaves and Scottie Upshall provided the goal in the win.

Pittsburgh are the NHL's highest-scoring team, averaging 3.63 goals per game prior to Wednesday.

Sabres star Jack Eichel scored his second goal of the game 2:35 into overtime to complete an exciting comeback in Nashville.

Buffalo were trailing 4-2 with 5:50 left in regulation when Brian Gionta and Kyle Okposo scored goals three minutes apart to force the extra frame.

Eichel then broke the tie with his 12th goal of the season, pushing the Sabres' win streak to three games -- all decided in overtime.

Tyler Johnson's pair of third-period goals 30 seconds apart helped the Tampa Bay Lightning pulled away from the Chicago Blackhawks for a 5-2 victory.

Nikita Nesterov and Nikita Kucherov joined Johnson on the scoresheet in the Lightning's four-goal third period.

Chicago took a 2-1 lead into the final frame before Tampa's scoring explosion. The loss snapped a three-game win streak for the Blackhawks.

How about a helping of pasta in extra time?  #DETvsBOSpic.twitter.com/oftERmFEAG

David Pastrnak scored with 47 seconds to spare in overtime, snapping the slumping Boston Bruins out of a four-game losing streak in a 4-3 win over the Detroit Red Wings.

The Minnesota Wild and Dallas Stars needed a shoot-out to decide their match, with Chris Stewart scoring the winner in the fifth round for a 3-2 victory for the former.

In New Jersey, the Los Angeles Kings beat the Devils 3-1 to end their four-game losing streak.

Following a four-goal night, Patrick Marleau kept up his heroics by scoring the winning goal as the San Jose Sharks edged the Winnipeg Jets 4-3.

The New York Islanders improved to 3-0-1 since firing their coach with a 4-2 decision over the Columbus Blue Jackets, while the Montreal Canadiens won handedly 5-1 to extinguish the Calgary Flames.