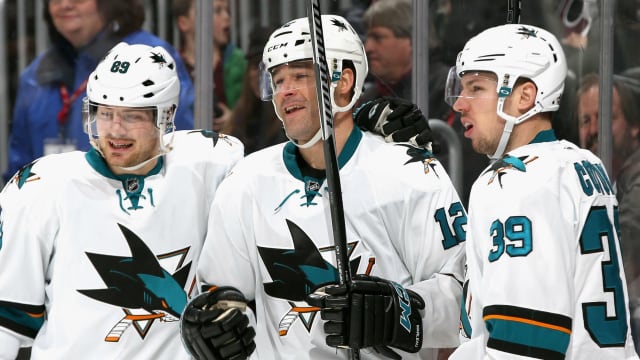 The Toronto Maple Leafs shut down the Calgary Flames in the NHL, while the Washington Capitals ran up the score in another lopsided victory.

Nazem Kadri's pair of goals and a stellar effort from goalie Frederik Andersen paced the Leafs in their 4-0 win.

In Washington, the Capitals improved their NHL-best record in topping the Carolina Hurricanes 6-1.

Meanwhile, Patrick Marleau put forth a superhuman effort with four goals in one period for the triumphant San Jose Sharks.

Toronto continued to surprise this season thanks to Andersen, who turned aside all 26 Flames shots for his second shutout.

Kadri's two goals were the 100th and 101st of his career. Rookies Mitch Marner and Zach Hyman joined Kadri with goal for the Leafs.

Calgary have lost five of six.

The 37-year-old Marleau scored four times in the third period to key a 5-2 win over the Colorado Avalanche.

He became the 12th player in NHL history with four goals in a period and is the first to do so since Mario Lemieux on January 26, 1997 -- nearly 20 years ago to the day.

San Jose have won five games in a row.

Nothing but Jets in those skates. #ANAvsWPGpic.twitter.com/JH6QZLXyhp

Tobias Rieder's goal 48 seconds into overtime gave the Arizona Coyotes a 3-2 win over the Florida Panthers.

Henrik Lundqvist and the New York Rangers held off the Los Angeles Kings 3-2 for a third straight win.

The veteran Lundqvist is the first goalie in NHL history to earn at least 20 wins in each of his first 12 seasons.

The Anaheim Ducks fended off a late surge by the Winnipeg Jets for a 3-2 victory.

The high-scoring Pittsburgh Penguins (30-11-5) put a four-game win streak on the line with the struggling St Louis Blues (23-19-5) in town to highlight Tuesday's matchups.