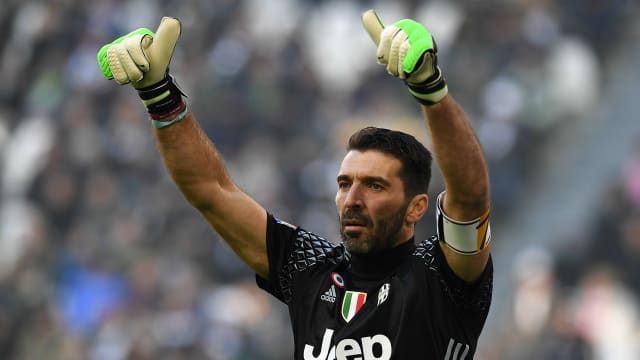 Massimiliano Allegri has hit out at the controversy surrounding Gianluigi Buffon following Juventus' 2-0 win over Lazio on Sunday.

The veteran goalkeeper hugged referee Paolo Tagliavento at full-time of the Serie A victory in Turin that preserved Juve's advantage at the top of the table over Roma.

The incident prompted significant scrutiny and was the front page of major sports newspaper Tuttosport on Tuesday, but Allegri blasted what he considered to be a determination to avoid his team's on-field exploits.

"This is stupidity. Don't make me use another word," said the 49-year-old.

"In Italy, instead of talking about the great piece of skill from [Paulo] Dybala when he scored the goal, the finish from [Gonzalo] Higuain, or the shot from 40 yards that didn't go in from [Lorenzo] Insigne against AC Milan, you go looking for other things. It's never about what the players do on the pitch.

"We never just enjoy football for what happens on the pitch. It's always about wasting time looking for other things."

Allegri's side host Milan in the Coppa Italia quarter-final on Wednesday looking to keep up their challenge for another domestic double.

Claudio Marchisio and Marko Pjaca are likely to make only the bench, with Allegri promising to rest some players following the hard-fought win over Lazio.

"We'll change some players, because we played a very tense and physical game," he said. "It will be a final and then we have a game with Sassuolo on Sunday.

"Marchisio is unlikely to be available for the game because he didn't train with the team [on Monday], he worked separately.

"As for Pjaca, it's difficult for him to play from the start. He's a boy who is destined for greatness, because he's always made big chances when he's made an appearance.

"There are no updates on the condition of [Mario] Lemina - he's out, but it seems that it's not a serious injury."