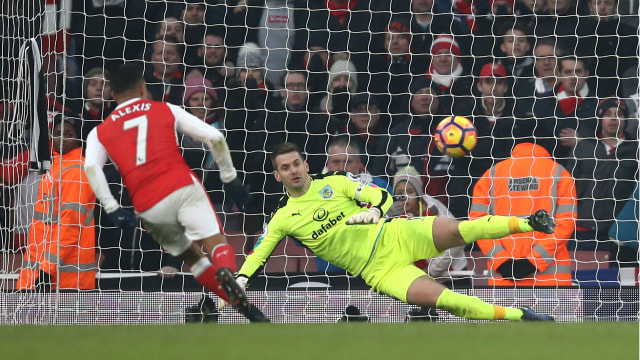 Arsenal survived both the dismissal of Granit Xhaka and the concession of a late penalty to beat Burnley 2-1 in dramatic fashion on Sunday, Alexis Sanchez's last-gasp spot-kick keeping the pressure on their Premier League title rivals.

Shkodran Mustafi opened his Gunners account after the break at Emirates Stadium, where Andre Gray equalised from the penalty spot in injury time.

Arsene Wenger's team refused to be denied though, Sanchez restoring the lead with a spot-kick of his own in the 98th minute as Arsenal snatched back the victory to climb to second in the table.

The hosts saw midfielder Xhaka sent off for the second time in his debut season before Burnley lost Dean Marney to a potentially serious injury.

The time added on as a consequence of that incident served to provide an extraordinary conclusion to the contest, in which the Clarets thought they had grabbed a point, when substitute Francis Coquelin fouled Ashley Barnes inside the area.

Another twist arrived in the dying moments, though, when Ben Mee was penalised for a high boot on Laurent Koscienly. Replays later showed the centre-back was offside when the ball was played in to the back post, but referee Jon Moss had no hesitation in pointing to the spot, Sanchez coolly dispatching the ball down the centre of the goal to regain maximum points.

Arsenal now have an FA Cup tie away to Southampton and home game against Watford to come before a crunch meeting with league leaders Chelsea at Stamford Bridge on February 4.

Burnley, meanwhile, stay 13th, having gone unrewarded yet again for a determined showing, as home form continues to be the most likely method of securing top-flight status for last season's Championship winners.

The Clarets fans who made the journey to the capital could be forgiven for not recognising their team in the first half. Burnley had lost eight of their nine previous league matches on the road this season, but they were unexpectedly defiant during the opening 45 minutes in London.

A 0-0 draw at Manchester United in October was the only prior occasion Burnley had returned from an away game with anything to show for their efforts and perhaps another heavyweight engagement inspired Sean Dyche's men to raise their level. Goalkeeper Tom Heaton proved equal to the task when called upon to make saves from Mesut Ozil, Koscielny and Sanchez.

The Gunners continued to dominate and they were rewarded a minute before the hour mark, Mustafi beating Stephen Ward to the ball from Ozil's corner and heading into the far side-netting, beyond the reach of the stretching Heaton.

Given Burnley's struggles outside the home comforts of Turf Moor, that goal initially appeared potentially fatal to the visitors' chances, until Xhaka earned a straight red card for a lunging, studs-up challenge on Steven Defour.

The away team had toiled without reward as they attempted to trouble Cech, a cause not helped by the worrying sight of Marney being stretchered off with 15 minutes to go.

Gray would later benefit from Coquelin's rashness in the 93rd minute, but Mee then committed a reckless infraction of his own.

Wenger had to celebrate Sanchez's dramatic winner out of the limelight, having been sent off by Moss during a thrilling, fractious climax, which ended with Dyche as the wronged party, the Burnley boss angrily confronting the fourth official as another away point slipped out of his team's grasp.