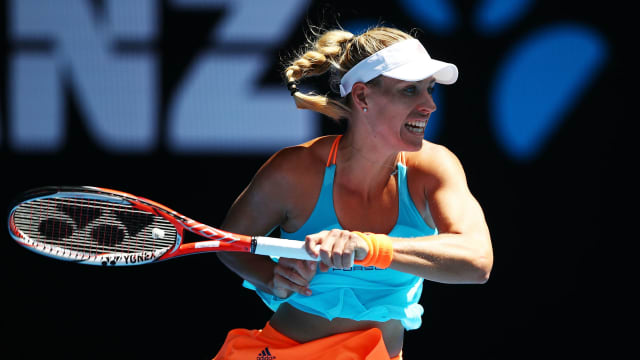 Angelique Kerber found her groove at the Australian Open on Friday as she cruised into the fourth round with a straight-sets win over Kristyna Pliskova.

The defending champion had been taken the distance in her opening two matches in Melbourne but was able to wrap up her third round match 6-0 6-4 in an assured display.

Eighth seed Svetlana Kuznetsova had another mammoth battle at the first major of the year as she squeezed past former semi-finalist Jelena Jankovic 6-4 5-7 9-7, the pair spending nearly four hours on court.

Seven-time grand slam winner Venus Williams was ruthless in her destruction of Duan Ying-Ying, the 2003 runner-up needing less than an hour to complete a comprehensive 6-1 6-0 triumph.

There were no problems for seventh seed Garbine Muguruza either, as she breezed past Anastasija Sevastova 6-4 6-2.

Early defeats in Brisbane and Sydney prior to the Australian Open were far from the perfect preparation for Kerber, but the rhythm appears to be returning.

Her serving was back on point and there were plenty of crisp groundstrokes as Pliskova was duly dispatched in 55 minutes.

It sets Kerber up nicely heading into the second week of the tournament, and she is feeling good ahead of a fourth-round meeting with Vandeweghe.

"I was feeling very good from the first point," she said. "I'm happy about my performance.

"Coco is a tough opponent. I have to move good, be ready, bring a lot of balls back but also be aggressive."

Six years ago Kuznetsova endured a four-hour battle with Francesca Schiavone at the Australian Open, and she was at it again against Jankovic.

Momentum switched on numerous occasions during their battle on Hisense Arena with Kuznetsova wasting 16 break points across the three sets, and throwing away a 4-1 lead in the second.

Luckily it did not matter in the end as she prevailed 9-7 in the decider to seal a fourth-round meeting with Pavlyuchenkova.

Only once in her last five attempts has Venus Williams reached the quarter-finals in Melbourne but she hopes to get there this time after her demolition of Duan.

Williams was rarely troubled in her comprehensive victory, and she immediately set her sights on the latter stages of the grand slam.

"Oh, yay! It's good [being in the fourth round]. It's never enough," she told a media conference.

"I've been in the fourth round before. I've tasted it before and it's always a great feeling because it means, hey, I have an opportunity for the quarter-finals. That's what I'm going to go for."

All Hail Queen Vee!
No.13 @Venuseswilliams drops only 1 game vs. Duan 6-1, 6-0 and books her 4th Grand Slam 4R in a row. #AusOpenpic.twitter.com/fcPWWioWVL