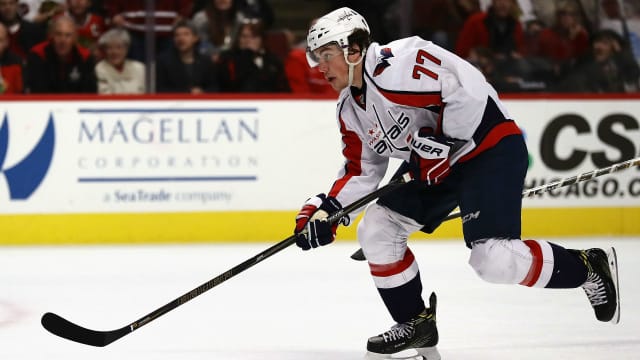 For the second time in as many games, the Washington Capitals scored seven goals, while Henrik Lundqvist and the New York Rangers ended a slump.

This time it was the St Louis Blues who the Capitals put up seven goals past in a 7-3 victory in NHL on Thursday, marking the first time they have scored seven or more goals in consecutive games since February 1993.

The Rangers, meanwhile, saw veteran goalie Lundqvist return to form in a 5-2 win over the Toronto Maple Leafs.

With two goals against the Dallas Stars in a 3-0 victory, New York Islanders captain John Tavares now has 34 games with two-or-more goals with the Islanders, tied for the second-most in franchise history.

The Capitals, 10-0-2 in their past 12 games, had goals from seven different players and chased Blues goalie Jake Allen from the game after he allowed four goals on 10 shots.

Washington extended their point streak to 12 games. T.J. Oshie and Evgeny Kuznetsov each had a goal and an assist, while Andre Burakovsky, Jay Beagle, Marcus Johansson and Justin Williams also scored for the Capitals (30-9-6). Oshie has now scored against all 30 NHL teams.

Allen was pulled from the game on two separate occasions as the Blues (23-18-5) lost for the fifth time in six games at Scottrade Center.

Michael Grabner scored a shorthanded goal with 5:03 left in the third period and scored an empty net goal to end the Rangers' (29-16-1) three-game losing streak while also ending the Leafs' three-game winning streak.

Lundqvist, who was pulled after allowing seven goals in two periods in a 7-6 loss to the Stars on Tuesday, earned his first win since January 7. He allowed only two goals to Tyler Bozak and Zach Hyman.

Ottawa Senators goalie Mike Condon made 42 saves for his third shutout of the season - a 2-0 triumph - as his team blanked the Columbus Blue Jackets, who have now lost five of eight since a 16-game winning streak.

Kyle Turris and Ryan Dzingel scored for the Senators (24-15-4), who have won four of their past five games and are currently second only to the Montreal Canadiens in the Atlantic Division.

The San Jose Sharks edged the Tampa Bay Lightning 2-1, the Nashville Predators prevailed 4-3 against the Calgary Flames, the Arizona Coyotes lost 4-3 to the Minnesota Wild and the Anaheim Ducks topped the Colorado Avalanche 2-1.

In their last meeting against the Boston Bruins on April 3, the Chicago Blackhawks top line featuring Artem Anisimov, Patrick Kane and Artemi Panarin combined for 11 points (five goals, six assists), highlighted by a Kane hat trick in a 6-4 win. With Bruins fans calling for Claude Julien to be fired, it seems like another key loss could be the nail in his coffin on Friday.