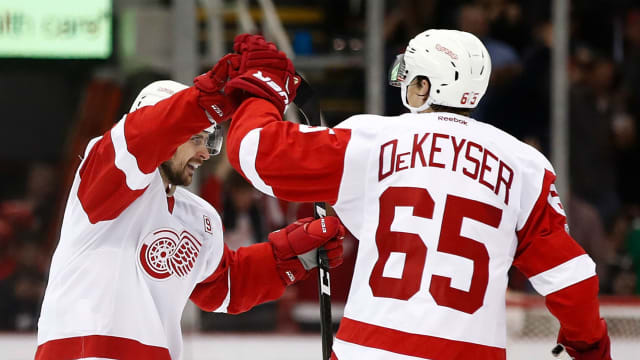 The Detroit Red Wings rallied from three goals down to beat the Boston Bruins in a shoot-out, while the Pittsburgh Penguins took advantage of an ice-cold Carey Price.

Trailing 3-0 and 4-1 in the first period, the Red Wings reeled off three unanswered goals in the second period and edged the Bruins in the shootout for a 6-5 win.

The Penguins, meanwhile, rode momentum from their 8-7 win on Monday to beat a struggling Price four times in a 4-1 win over the Montreal Canadiens.

Connor McDavid surpassed the 100-point plateau with a three-point performance for the Edmonton Oilers.

Tomas Tatar stood out among five different Red Wings goalscorers with his three-point performance (one goal, two assists) and a plus-four rating.

Dylan Larkin joined Tatar in plus-four territory and had a goal and an assist while Frans Nielsen scored the decisive goal in the third round of the shoot-out as Detroit won their third in a row.

PRICE IS NOT RIGHT

Montreal have lost three of four largely due to goaltender Price, who allowed four goals on 22 shots against the Penguins.

Winnipeg Jets goalie Ondrej Pavelec made 30 saves in his NHL season debut for a 6-3 victory over the Arizona Coyotes.

Pavelec was recalled from the AHL on Tuesday in the hope the veteran might breathe new life into the slumping Jets, who snapped a four-game losing streak thanks to his efforts.

The @EdmontonOilers are on the board and @cmcdavid97 has point #100. #FLAvsEDMpic.twitter.com/dS7FP44UYf

McDavid assisted on Zack Kassian's first-period goal, marking the star's 100th point in his first 92 career games, though he was far from done.

The 19-year-old added a second assist and scored the game-winning goal on a breakaway with 2.6 seconds remaining in overtime to topple the Florida Panthers 4-3.

McDavid needed the fourth-fewest games among active players to reach the milestone, behind Alex Ovechkin (77), Sidney Crosby (80) and Evgeni Malkin (89).

Ovechkin and the Washington Capitals (29-9-6) look to start a new win streak against the St Louis Blues (23-17-5) to highlight Thursday's games, after seeing their nine-game run snapped earlier in the week.