'He is made of different stuff' - Spalletti hails Nainggolan after wondergoal 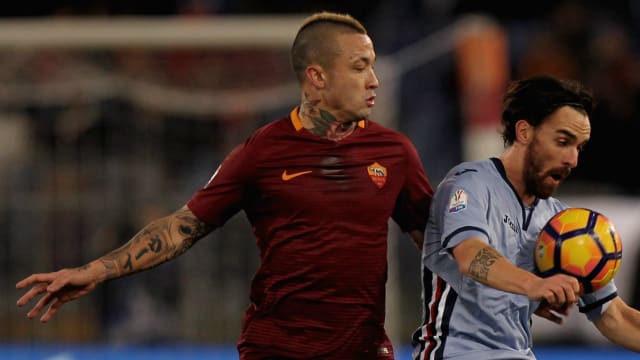 Luciano Spalletti paid tribute to Radja Nainggolan after he starred and scored a wondergoal in Roma's Coppa Italia romp against Sampdoria.

Roma thrashed the visitors 4-0 on Thursday to move into the last eight, the Belgium international netting twice - including a magnificent 25-yard volley to open the scoring.

Stephan El Shaarawy and Edin Dzeko also netted against Sampdoria, who had hit the post through Luis Muriel prior to Nainggolan's stunner.

But it was Nainggolan who won the praise of his head coach after he made it five goals in eight appearances as Roma won their fourth straight match in all competitions.

"Nainggolan is made of different stuff," Spalletti said to Rai.

"He is strong, can play in any position and needs spaces to roam. If you pen him in, he can struggle, but a thoroughbred has to be allowed to run free and follow its instinct.

"If that Muriel shot had gone in off the post, we would have been in trouble. It took a sensational goal from Nainggolan to break the deadlock.

"Nainggolan has returned to being that player who knows how to do everything.

"I am above all pleased that everyone is giving their contribution, even those who come off the bench or don't play as often.

"There are many strong sides out there, so if you don't follow up good results, especially in Italian football, it takes a moment for it to all come crashing down."

Roma will take on second-tier Cesena in the quarter-finals.