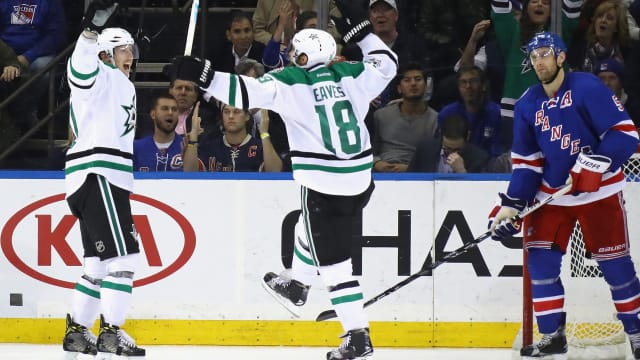 The Dallas Stars held on for a win over the New York Rangers in the NHL, while the Chicago Blackhawks rallied to victory.

Cruising with a four-goal lead, the Stars eventually ended up 7-6 winners against the Rangers on Tuesday.

The Blackhawks, meanwhile, were able to complete their comeback, overcoming the Colorado Avalanche 6-4.

Auston Matthews helped the Toronto Maple Leafs to their victory.

Jamie Benn and Patrick Eaves (both a goal and two assists) had the Stars in complete control against the Rangers.

But goals from Chris Kreider, Derek Stepan and Mika Zibanejad early in the third period helped New York back into the game, although that was as close as they got.

The Blackhawks trailed the Avalanche through two periods, but Vinnie Hinostroza tied the game early in the third.

He scored the go-ahead goal eight minutes, 11 seconds into the period before Tanner Kero sealed the win.

The Maple Leafs also had to come from behind to edge the Buffalo Sabres 4-3.

An unbelievable display of skill that you have to see to believe. WOW! pic.twitter.com/SnLQQxgMoG

Auston Matthews' shot is out of this world. pic.twitter.com/7TEMFCwjyH

The Columbus Blue Jackets had a 4-1 win against the Carolina Hurricanes and the Ottawa Senators overcame the St Louis Blues 6-4.

The New Jersey Devils beat the Minnesota Wild 4-3 and the Calgary Flames had a 5-2 victory over the Florida Panthers.

The Anaheim Ducks needed overtime to get past the Tampa Bay Lightning 2-1 and the Vancouver Canucks beat the Nashville Predators 1-0.