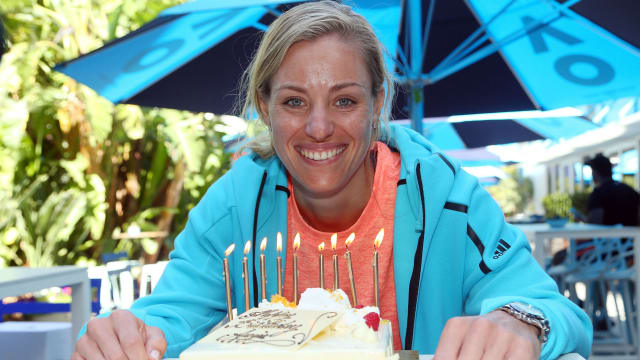 Reigning champion Angelique Kerber continued to do things the hard way at the Australian Open, but nonetheless booked her spot in round three.

The German's progress was not matched by all of her fellow seeds, though, as Carla Suarez Navarro and Zhang Shuai fell to surprise losses.

And Wednesday's play also signalled the end of the road for Olympic champion Monica Puig.

Kerber needed three sets in her first-round triumph over Lesia Tsurenko and was taken the distance again by compatriot Carina Witthoeft before winning through 6-2 6-7 (3-7) 6-2.

The first set was routine for the world number one, who then conceded six consecutive points in losing the second-set tie-break.

It looked ominous for Kerber when she was broken to love in the first game of the decider, but she recovered her poise to mark her 29th birthday with a victory that sets up a meeting with Kristyna Pliskova.

THIS LITTLE PUIG WENT ALL THE WAY HOME

Olympic champion Puig only dropped one game in overcoming Patricia Maria Tig in her opening match, but her Melbourne dreams were shattered by Mona Barthel.

In a contest that saw 12 breaks of serve, the 29th seed Puig succumbed to an opponent ranked 135 places below her, suffering a 6-4 6-4 loss.

Despite her Rio success, Puig has still never gone beyond the fourth round of a grand slam.

The highest-seeded casualty was Spain's Suarez Navarro, a 7-6 (7-1) 6-3 loser against Sorana Cirstea.

There was better news for Venus Williams, a 6-3 6-2 winner over Stefanie Voegele, and French Open title-holder Garbine Muguruza, who defeated Samantha Crawford 7-5 6-4.

Other seeds to book safe passage to round three included Svetlana Kuznetsova, Elina Svitolina and Anastasia Pavlyuchenkova - with the latter two facing each other next.