Alex Thomson today smashed the world record for the greatest distance sailed solo in 24 hours while taking part in the Vendee Globe yacht race. He covered 536.81 miles between 0700 Sunday and 0700 Monday at an average speed of 22.36 knots (26mph) beating the previous record by more than 2 miles.

The British sailor currently holds second position in the non-stop, single-handed race which circumnavigates the Earth and is referred to as the 'Everest of sailing'. He is hunting down race leader Armel Le Cleac'h in what is fast becoming a Hollywood ending to the prestigious event. 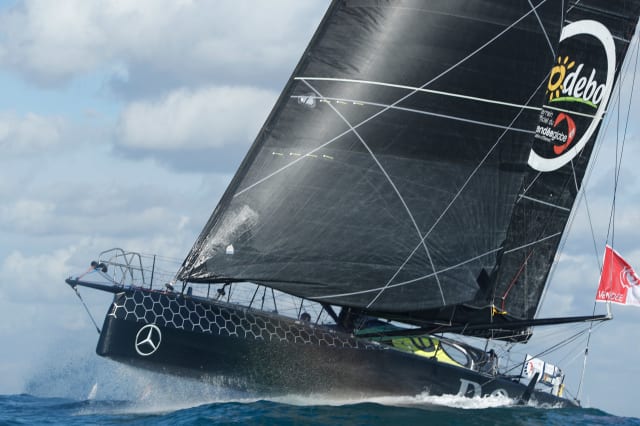 If Thomson can overhaul the 75-mile lead Le Cleac'h currently has it would complete one of the most remarkable comebacks in the race's history. Thomson was more than 1,000 nautical miles behind after his boat's starboard hydrofoil was ripped off during a collision with an unidentified submerged object on November 19 last year.

Before the accident Thomson had been leading the fleet, 100 nautical miles ahead of his competitors, but he fell two days behind in the Southern Ocean, as the damaged part of his boat struggled on port tack.

After rounding Cape Horn, however, the 42-year-old made the most of favourable weather conditions and blasted his way up through the Atlantic Ocean. Now, with less than a week of sailing remaining, Thomson is right on Le Cleac'h's heels with the pair expected to cross the finish line off the Atlantic coast of France by Thursday.

No Brit has ever won the Vendee Globe race - Ellen MacArthur's famous second-place finish in 2001 being the closest any Brit has got. Do you think Thomson can catch Le Cleac'h? Leave your comments below.