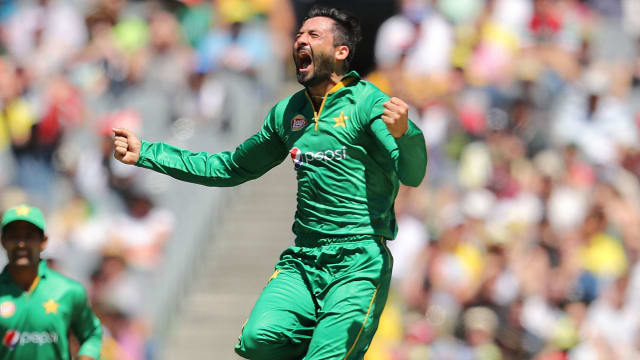 Pakistan won in Australia for the first time since 2005 in any format on Sunday, sealing a six-wicket victory in the second one-day international.

Having suffered a whitewash in the Test series and lost the ODI opener by 92 runs, a response was desperately required from the tourists and they finally delivered at the MCG, where stand-in skipper Mohammad Hafeez top-scored with 72 and Shoaib Malik made a crucial, unbeaten 42.

In a sign that perhaps their luck was finally set to turn, Pakistan benefited from a costly Steve Smith mistake as they chased Australia's 220 all out, the captain putting down Hafeez in the first over off Mitchell Starc (2-45).

Hafeez, leading the team in place of the injured Azhar Ali, took full advantage, making serene progress to a half century that was barely disrupted by the departure of Sharjeel Khan (29), who edged James Faulkner's full delivery just outside off stump to wicketkeeper Matthew Wade.

The nerves did briefly mount for Pakistan from the 31st over when Josh Hazelwood snaffled Babar Azam (34) off Starc at third man boundary.

The visitors' skipper followed an over later, his concentration finally broken as he played across the line to a fuller Faulkner (2-35) ball outside off, scooping a tame shot to Hazlewood at mid-on.

Shoaib survived two reviews in quick succession before seeing Asad Shafiq depart for 13, taken easily by Wade, having gone after a wide Starc delivery, but he continued to attack, supplying five boundaries and a maximum to keep the chase on track.

What a shot from Malik! #AUSvPAKpic.twitter.com/mupwBScjZJ

But Umar Akmal (18 not out) provided effective support during a tense conclusion, lifting some of the pressure by punching Faulkner back down the ground for four, before Travis Head sent a wide down the leg side to hand Pakistan the long-awaited triumph.

Earlier, Smith anchored Australia's innings by top-scoring for the hosts with a patient 60, the skipper reaching the boundary just twice from 101 balls before a slower Imad delivery drew an inside edge.

Nearly all of Australia's specialists got starts but failed to build, openers David Warner (16) and Usman Khawaja (17) both falling to Junaid.

Mitch Marsh picked out Imad at cover off Amir for a duck an over later, leaving the home team reeling at 41-3.

Hasan Ali (1-29) had already tempted Head into an attempted cover drive that saw him edge to Mohammad Rizwan, while Imad bowled Maxwell when the flamboyant Victorian came down the track but missed as he tried to hit through the offside.

Faulkner survived to the end of the innings, when he lofted one from Amir to Shafiq at point.

He had received no assistance from his fellow members of the tail, Starc (3), Cummins (0) and Hazlewood (0) all departing quickly, and Australia's earlier failure to push on from promising positions ultimately proved fatal.