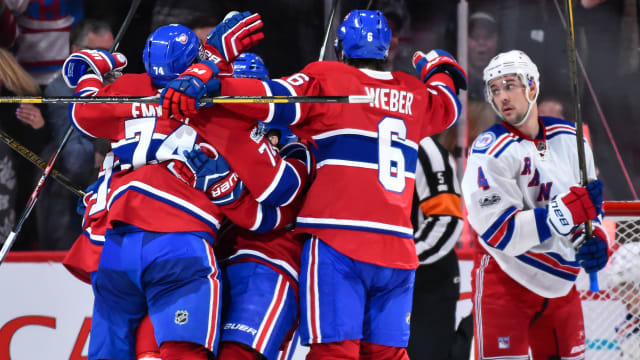 The Montreal Canadiens starred late to trump the New York Rangers, while reigning champions the Pittsburgh Penguins suffered another defeat.

Montreal rallied in the third period to beat the Rangers 5-4 in the NHL on Saturday.

The Penguins slumped to a third consecutive defeat, beaten by the streaking Detroit Red Wings 6-3.

Elsewhere, the Carolina Hurricanes overcame the New York Islanders, while the Edmonton Oilers won in a shoot-out.

Trailing 3-2 at the start of the final period, the Canadiens scored three goals in just over a minute to beat the Rangers.

Alexei Emelin, Max Pacioretty and Paul Bryon were on target for the rampant Canadiens.

The Penguins lead 2-0 and 3-2 but were unable to hold on against the Red Wings, who scored three third-period goals.

It is Pittsburgh's worst losing streak since dropping four successive games in December 2015.

9th OT victory for the @LAKings.
23rd goal and eighth game-winner this season for @JeffCarter_77.

The Hurricanes beat the Islanders 7-4 and the Oilers edged the Calgary Flames 2-1 in a shoot-out.

Overtime was needed as the Los Angeles Kings prevailed 3-2 against Winnipeg Jets, the Toronto Maple Leafs topped the Ottawa Senators 4-2, the Philadelphia Flyers lost 6-3 to the Boston Bruins, the Columbus Blue Jackets fell 4-3 to the Florida Panthers and the Minnesota Wild were 5-4 winners over the Dallas Stars.

The St Louis Blues shut out the San Jose Sharks 4-0, the Anaheim Ducks blanked the Arizona Coyote 3-0 and the Nashville Predators defeated the Colorado Avalanche 3-2.

The Washington Capitals host the Flyers on Sunday, while the Chicago Blackhawks take on the Wild.