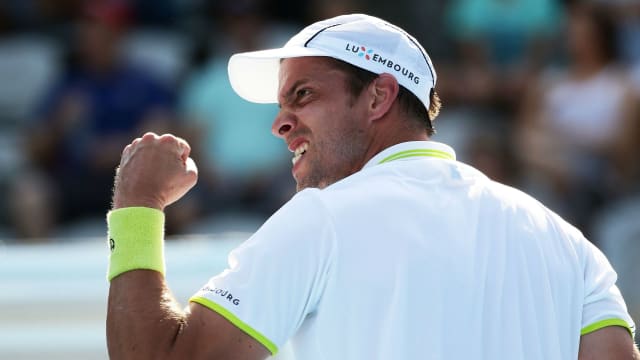 Viktor Troicki's bid for a third Sydney International crown in as many years was ended by Gilles Muller, who won 6-3 7-6 (8-6) to book a final meeting with Dan Evans.

The Serbian defeated Grigor Dimitrov and Mikhail Kukushkin in the respective 2016 and 2015 finals, and was on a 10-match winning run at the tournament, but there will be no hat-trick as Muller proved too strong on Friday.

Muller broke at the first time of asking to take a 2-0 lead in the opener and that proved all he needed to get his nose in front.

At the end of a tight second set that went to a tie-breaker, Troicki fought back from 5-2 down to level but Muller held his nerve to earn a spot in his sixth ATP Tour final - having lost the previous five.

"I served very well today, especially in the crucial moments when I was down break points," said Muller. "I always managed to serve a first big serve. It helped me a lot.

"Especially in the second set when I was also starting to struggle a little bit with the heat. In those pressure moments, the serve was there. That's what got me through."

Muller's opponent will be Dan Evans, who will contest an ATP Tour final for the first time after outlasting Andrey Kuznetsov 6-2 3-6 6-3.

Kuznetsov was also hoping to reach his maiden Tour showdown but he will have to wait as Evans completed a good day for the Brits, following Johanna Konta's triumph in the women's final at the Sydney Olympic Park Tennis Centre.

In Auckland, Jack Sock has the chance to assuage the disappointment of last year's runners-up finish at the ASB Classic after securing a place in the final once again.

Sock, forced to retire when a set down to Roberto Bautista Agut in last year's final, came through a last-four meeting with fellow American Steve Johnson.