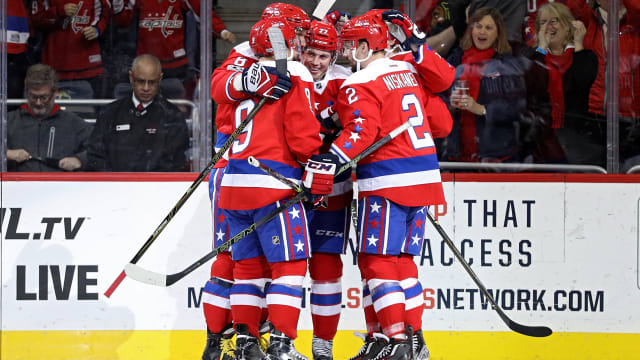 The Washington Capitals recorded their eighth straight NHL win as the Toronto Maple Leafs continued their strong record on the road.

The Capitals extended their winning streak in some style, thrashing the Chicago Blackhawks 6-0 on Friday.

The Maple Leafs made it seven wins in eight road games with a 4-2 victory over the New York Rangers at Madison Square Garden.

The Columbus Blue Jackets were also among the winners.

The Capitals scored three goals in the first period to cruise to their win.

Braden Holtby made 24 saves in the shutout.

The Maple Leafs are enjoying being on the road.

With Sergei Bobrovsky out due to illness, the Blue Jackets needed Joonas Korpisalo to overcome the Tampa Bay Lightning 3-1.

Korpisalo made 31 saves as Josh Anderson, Nick Foligno and Boone Jenner scored in the comeback win.

CAPITALS ON A ROLL

The @Capitals are searching for their 8th straight W and off to a good start. #CHIvsWSHpic.twitter.com/fQh1MKhj1e

The Carolina Hurricanes beat the Buffalo Sabres 5-2, the Arizona Coyotes were too good for the Winnipeg Jets 4-3, the New Jersey Devils edged the Calgary Flames 2-1 and the New York Islanders had a 5-2 win over the Florida Panthers.