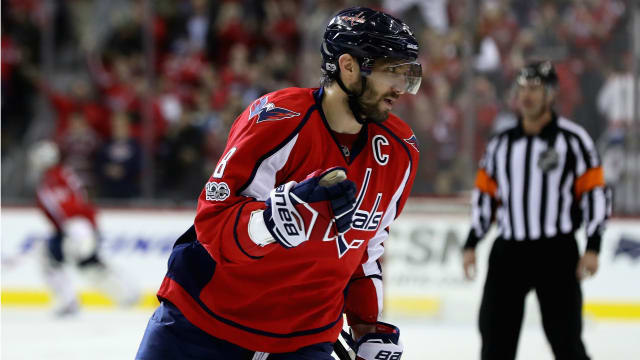 Alex Ovechkin reached a milestone in the Washington Capitals' win against the Pittsburgh Penguins, while the Montreal Canadiens had no trouble scoring against the Winnipeg Jets.

The Canadiens used seven goals to defeat the Jets 7-4.

Meanwhile, the Florida Panthers and the Calgary Flames won.

With 35 seconds played, Ovechkin scored to become the 84th player in NHL history to join the 1,000-point club.

The goal was vintage Ovechkin as the dynamic winger crossed the blue line, deked across the right circle and released his lethal snap shot over the left shoulder of Marc-Andre Fleury.

Ovechkin, in his 12th NHL season, reached the milestone in his 880th game. His 1,000 points rank seventh among active players.

The Panthers were 2-1 winners over the Islanders, while the Flames trumped the San Jose Sharks 3-2.

After their streak came to an end, the Penguins travel to the Ottawa Senators on Thursday.  The Canadiens face the Minnesota Wild, the Vancouver Canucks meet the Philadelphia Flyers and the Los Angeles Kings take on the St Louis Blues.