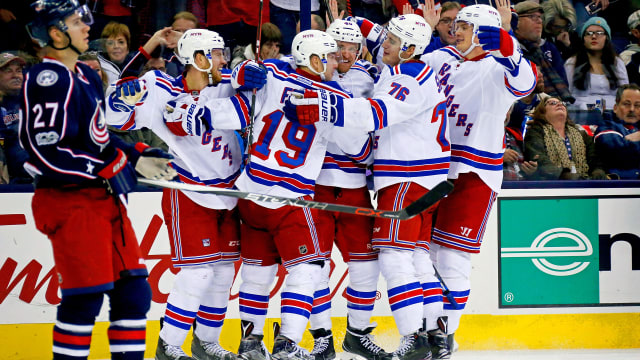 The New York Rangers staged a stunning comeback to beat the Columbus Blue Jackets in the NHL, while the Vancouver Canucks' winning run was ended.

Back in action for the first time since their 16-game winning streak was broken, the Blue Jackets gave up a lead to lose 5-4 to the Rangers.

The Canucks had a six-game run of their own going, only for that to be snapped by the Calgary Flames.

Meanwhile, the Montreal Canadiens were too good for the Toronto Maple Leafs.

The Blue Jackets looked in control.

However, the Rangers stormed home, two goals from Michael Grabner - including the match-winner with 17 seconds left - and a pair from Adam Clendening seeing them complete a comeback win.

First-period goals from Alex Chiasson and Matt Stajan set up the Flames' 3-1 victory.

While Bo Horvat gave the Canucks hope, Michael Frolik ended any chances of a comeback late on.

The Canadiens made it three straight wins with their 5-3 success over the Maple Leafs.

Toronto tied the game during the first period and pulled it back to 4-3 in the second, but the Canadiens held on.

The @NYRangers trailed by three in the 2nd.

The Duke has some dirty dekes. #NYIvsARIpic.twitter.com/Mq1N5zSPSM

The Los Angeles Kings had a 4-3 overtime win against the Minnesota Wild and the Edmonton Oilers also needed OT to get past the New Jersey Devils 2-1.

The Buffalo Sabres battled past the Winnipeg Jets 4-3, the Philadelphia Flyers had a 4-2 win over the Tampa Bay Lightning and the Boston Bruins shut out the Florida Panthers 4-0.

The Washington Capitals edged the Ottawa Senators 1-0 and the Arizona Coyotes had a 2-1 shoot-out win against the New York Islanders.