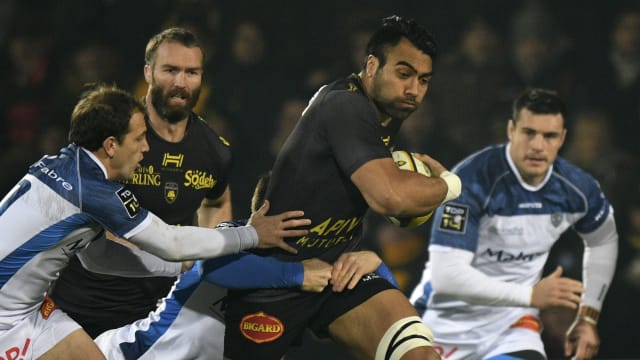 La Rochelle took over as the Top 14 leaders by coming from behind in the second half to beat Castres 22-8 at Stade Marcel-Deflandre after Brive edged out struggling Grenoble on Saturday.

Versatile Australian Zack Holmes scored 17 points with the boot and back-row Victor Vito came up with La Rochelle's only try midway through the second half to put them four points clear of Clermont Auvergne and Montpellier.

Fifth-placed Castres led 8-6 at the interval after hooker Jody Jenneker went over and Ben Urdapilleta sent a penalty through the posts, but La Rochelle scored 16 points without reply in the second half to seal victory.

There was drama in the final 10 minutes when Castres replacement Yohan Montes was shown a red card for catching the head of Mohamed Boughanmi with his boot when the La Rochelle prop, who was yellow carded, was on the ground.

Gaetan Germain was the star of the show as Brive beat struggling Grenoble 23-22 in the only other Top 14 encounter of the day.

The full-back scored four first-half penalties and another two after the break to move Brive up to eighth, leaving Grenoble still in the mire despite outscoring the hosts by three tries to one.

Pau's home clash against Lyon was postponed due to a frozen pitch.