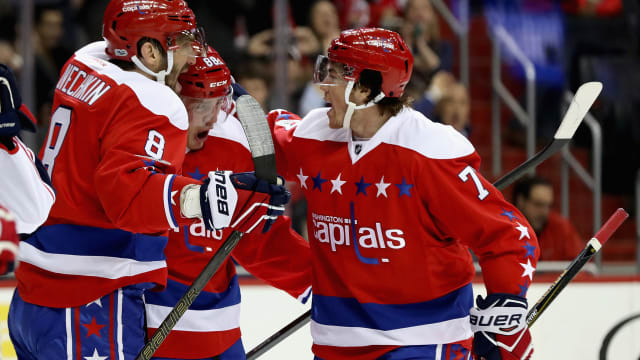 The Columbus Blue Jackets' amazing winning streak came to an end in the NHL, while the Minnesota Wild won a thriller.

The Washington Capitals shut out the Blue Jackets 5-0 to snap Columbus' streak at 16 consecutive wins.

The Wild scored four times in the third period to get past the San Jose Sharks 5-4 on Thursday.

The Blue Jackets fell a win short in their bid to equal the longest streak in NHL history, set by the 1992-93 Pittsburgh Penguins.

Braden Holtby stopped all 29 shots he faced for the winners.

The Wild looked certain for defeat when they trailed the Sharks by two goals early in the third period.

But Eric Staal pulled a goal back before Mikko Koivu scored twice to give the Wild a lead they would never relinquish.

Staal (two goals, one assist) and Zach Parise (one goal, two assists) each had three points.

The Blackhawks needed OT to get past the Buffalo Sabres 4-3.

The Sabres led three times but were pulled back on each occasion before Patrick Kane netted the match-winner just 56 seconds into overtime.

Through 20, the @capitals have two on the hottest team in the league. #CBJvsWSHpic.twitter.com/YTuK8Vcv3y

The Detroit Red Wings had a 4-0 win over the Los Angeles Kings and the Nashville Predators crushed the Tampa Bay Lightning 6-1.

The Edmonton Oilers edged the Boston Bruins 4-3 and the Carolina Hurricanes overcame the St Louis Blues 4-2.