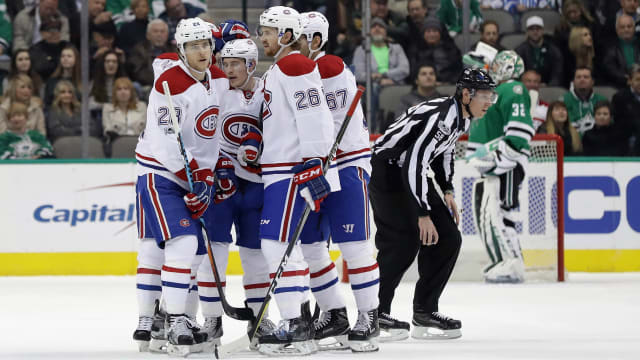 The Montreal Canadiens were winners in overtime against the Dallas Stars, while the New York Rangers trumped the Philadelphia Flyers.

Max Pacioretty scored the winner as the Canadiens edged the Stars 4-3 in OT in the NHL on Wednesday.

The Rangers accounted for the Flyers 5-2 thanks to Henrik Lundqvist.

There were also wins for the Calgary Flames and the Vancouver Canucks.

Montreal's last five games have been decided in the additional time.

And the Canadiens claimed back-to-back wins in OT thanks to Pacioretty's strike 19 seconds into the period.

The Canadiens improved to 5-6 in overtime this season.

The Rangers used 30 saves from Lundqvist to see off the Flyers.

After conceding four goals to the Buffalo Sabres, the Rangers were a lot better in defence as the New York franchise won for the fourth time in five games.

The Calgary Flames were a class above as they accounted for the Colorado Avalanche 4-1 and the Vancouver Canucks shut out the Arizona Coyotes 3-0.

Meanwhile, the Winnipeg Jets defeated the Florida Panthers 4-1 and the Detroit Red Wings lost 2-0 to the Anaheim Ducks.

RECORD ON THE CARDS?

The Columbus Blue Jackets can match the NHL record for 17 consecutive wins with victory over the Washington Capitals on Thursday. The Minnesota Wild take on the San Jose Sharks and the Chicago Blackhawks face the Buffalo Sabres.