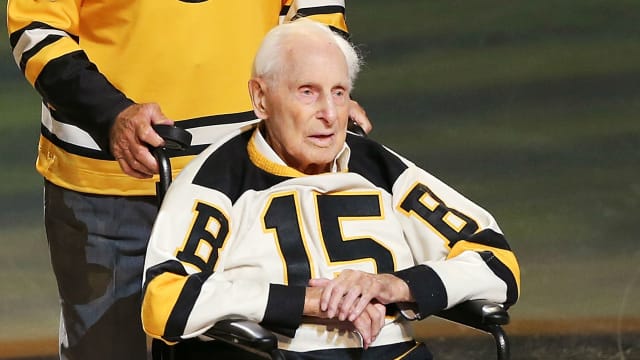 Hockey Hall of Famer Schmidt had been the oldest living former NHL player.

Schmidt helped the Bruins win the Stanley Cup in 1939 and 1941 and was selected to the first-ever NHL All-Star Game in 1947.

He was an All-Star selection previously in 1940 after leading the NHL in scoring with 22 goals and 30 assists in 48 games.

Remembering the legendary Milt Schmidt, one of the great ambassadors of our game. https://t.co/OIoQu2ZMQvpic.twitter.com/wukhgAob3T

In 13 seasons as an NHL coach, 11 with the Bruins and two as the Washington Capitals' bench boss, he did not find the same success.

"I feel as though I'm one of the luckiest people in the world."

Schmidt took the Bruins to the playoffs just four times - in his first five seasons on the bench - and lost in the Finals twice. After helping Boston win the Stanley Cup as a general manager in 1972, Schmidt was the first GM of the new Capitals franchise in 1974.

While he was not successful as a coach, he was a Bruins legend for his play on the ice. He centred Boston's 'Kraut Line' with childhood friends Woody Dumart and Bobby Bauer - both wingers later inducted to the Hall of Fame.

Prior to the 2016-17 home opener, Milt Schmidt joined Bobby Orr to drop the ceremonial puck. pic.twitter.com/JK9pxM84hc

Schmidt received the Lester Patrick Trophy for contributions to hockey in 1996.