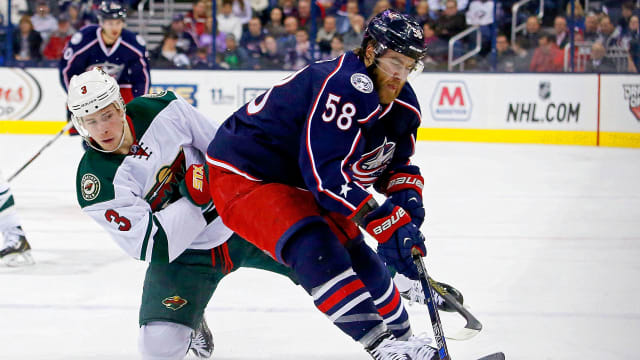 The Columbus Blue Jackets stretched their winning streak to 15 in the NHL, while the Pittsburgh Penguins needed overtime.

In a clash between two form teams, the Blue Jackets proved too good for the Minnesota Wild with a 4-2 win.

It saw them tie the second-longest winning run in the NHL, while it ended the Wild's streak at 12.

The Penguins had to fight hard for their victory, overcoming the Montreal Canadiens 4-3 after overtime.

The Blue Jackets made a red-hot start and capitalised.

Cam Atkinson scored twice, to go with a Jack Johnson goal, as they took a 3-0 lead they would not relinquish.

Mikael Granlund and Jason Zucker netted for the Wild, either side of Seth Jones restoring the Blue Jackets' three-goal lead.

The Penguins and Canadiens played out quite the game.

Both teams led but the clash was tied after two periods, before Brian Flynn and Conor Sheary exchanged goals in the third.

But Evgeni Malkin would score the winner with a slap shot during a power play in OT.

AVALANCHE OF GOALS FOR RANGERS

Chris Kreider scored a hat-trick to go with two goals from J.T. Miller and another from Jimmy Vesey.

The Boston Bruins overcame the Buffalo Sabres 3-1 and the Tampa Bay Lightning beat the Carolina Hurricanes 3-1.

The Florida Panthers were too good for the Dallas Stars 3-1, the Calgary Flames overcame the Arizona Coyotes 4-2, the Vancouver Canucks had a 3-2 shoot-out win against the Edmonton Oilers and the Los Angeles Kings edged the San Jose Sharks 3-2.