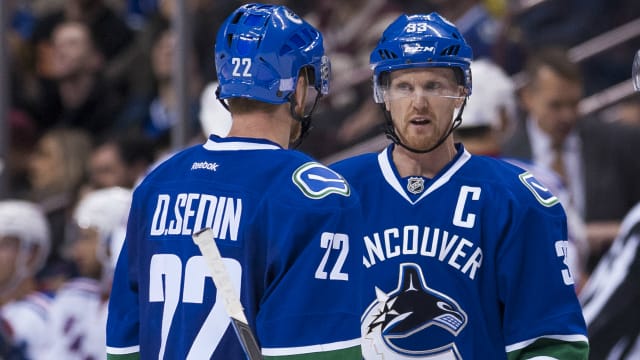 The Vancouver Canucks prevailed in overtime in the NHL on Friday, while the Nashville Predators returned to winning ways.

Henrik Sedin settled the contest with less than a minute remaining in OT as the Canucks outlasted the Anaheim Ducks 3-2.

The Predators snapped a three-game skid after shutting out the St Louis Blues 4-0.

There were also wins for the Carolina Hurricanes and the San Jose Sharks.

With 58.1 seconds remaining, Sedin made himself a hero in Vancouver.

Sedin scored on a two-on-one situation, firing a snap shot past John Gibson as the Canucks rallied to beat the Ducks, who led 2-1 heading into the third period.

After a winless run, the Predators bounced back and in style, too.

Yannick Weber, Filip Forsberg and Viktor Arvidsson scored in a dominant second period to see to give St Louis the Blues.

The Hurricanes extended their home point streak to 11 games thanks to a 3-2 win over the Chicago Blackhawks, while the Sharks blanked the Philadelphia Flyers 2-0.

WILD AND BLUE JACKETS PUT STREAKS ON THE LINE

Saturday's showdown promises to be a classic as the Minnesota Wild and the Columbus Blue Jackets face-off. The Wild are in the midst of a 12-game winning run, while the Blue Jackets have won 14 in a row.